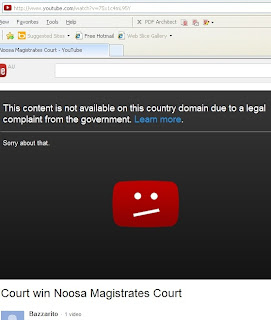 The video contained information on how fraudulently the legal system operates and how the masses can quite easily defeat it.

The legal system tries to hold you the person e.g. John Citizen responsible for the corporate entity JOHN CITIZEN accountable in court which is UNLAWFUL.

The video was removed a short time after with only 2013 views.

Here is a transcript of the video:


Magistrate abandoning the court after being called to show her"Writ of commission" and her Bonding agreement. On abandonment the defendant becomes the highest authority in the court and dismisses the case. Any further interaction from court officers is met with "No consent"

Person:                “I am here regarding this matter anyway, through special appearance as a personal representative of the person being in capacity as the administrator.”
“I am asking you are you under oath today?”

An upload of the video is available at the following location:

any blow back yet? did this actually work? i have a great understanding of what you did but im hard pressed finding any real proof that these crooks are backing down. What was the appearance for. (what charge) if i may ask.

The information appeared on a facebook page called: "Aussies against political corruption and lies".

As we should be aware not all judges/magistrates follow the law, as they are sworn to uphold firstly the (corrupt) courts, secondly their colleagues and lastly the client.

Corpau is aware of documents being released later this year exposing the corrupt government and legal system, of which some of this documentation will appear on this site.

thank you for answering absolutely none of my questions. appreciated Look forward to seeing these documents

This is a complete waste of time if there was no win for the defendant. If there was a win for the defendant i am sure all and sundry would have heard about it by now.
So whilst this was a victory on the day i would think this particular defendant has paid the price for being a smart arse.
If he had a win on the charge, Which was? great news but i somehow doubt it.

what actually is the writ and bonding contract he is speaking of as i cant find any info on it. what act is it under.

I did this aswell in noosa court. Magistrate abandoned the court and I dismissed the case...then got arrested by the prosecutor...

Thats because no one at court (other than the defendant) can testify that some one who turns up via notice to appear or summons is actually the person in the charge. So when some one in answer to a matter in the court gets up and says they are not the "person' Bill Smith but a free man Representing etc and blah blah blah, they are actually at that time denying they are the person relavent to the matter. So if they deny that they are the person so named then in effect, the person so named is not present, so if they are not present then guess what, the magistrate issues a warrant for the arrest of Bill Smith. If these people trully one then the court would say so. The easiest thing to do is ring up the the court the next day and ask if their is a warrant issued. Well guess what when it comes to the crunch I have not had a single person who does such a thing not find out they have a warrant.

Every time i get a fine from the electrol commission. I write them a letter asking them what referendum created your department and instantly they send me a letter telling me the fine was acciddently sent.

Erm... We are the law eg. Ultimately the law/legal record is made of people, so if enough people know and adopt this it becomes the law.

I asked the judge for her remedy certificate of commission and bonding agreement and denied me everytime I asked them security removed me from the court...

Writ of commission bonding agreement is a legal remedy of common law under the constitution of australia 1901 which is our lawful rule of law that is valid only with the Queens proclamation approval stamp ?? Not the invalid fraudulent acts and statutes of the Australian act 1986 which was denied twice in 1988 referendum so it is treason

This is nothing to do with what you state. This is trust law. Bible law