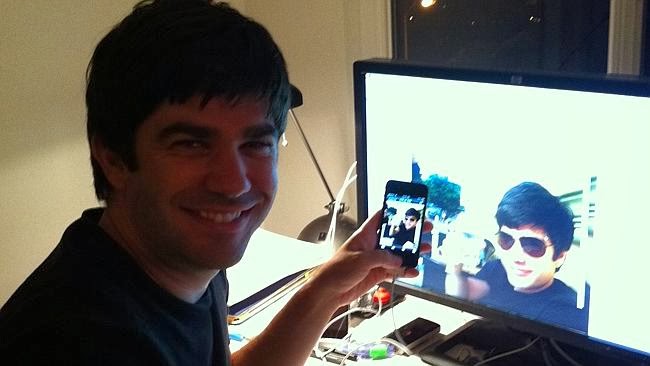 John Papandriopoulos, the founder of SnappyCam. Source: Supplied
JOHN Papandriopoulos's dad forked out a relative mint for an IBM clone computer for his family decades ago. Now, it seems the investment has paid off.


The Melbourne-born techno entrepreneur has gone to ground in San Francisco after reports Apple has bought his company which developed the No. 1 selling phone camera app, SnappyCam.

It is not known how much Apple paid for the deal but insiders suggest it would be well into a seven-figure sum.

The app has been removed from Apple's iTunes site, sparking speculation it will be incorporated into future iPhones for free.

In a classic "local-boy-does-good" story, Dr Papandriopoulos revealed in an interview last year that his father - an electronics engineer who moved from Greece shortly after the Melbourne Olympics in 1956 - was responsible for sparking his interest in technology.

And his move into the big time would come as no surprise to the 35-year-old's computer science and electrical engineering former peers at RMIT and the University of Melbourne.

When he graduated from RMIT nearly 12 years ago, he won the J.N. McNicol Prize, given to the top student across all faculties for academic excellence and leadership potential.

His "thirst for discovery" prompted him to do his PhD at the University of Melbourne.

"Education was always a big focus in the family. Yet I nearly didn't make the cut into Melbourne High School because we didn't realise at the time that entrance-exam tuition was available and commonplace," Dr Papandriopoulos wrote in a Melbourne University publication. SnappyCam
"The four years at MHS was a pivotal time and set me up for life," he said.

When he finished his education, he moved to the US to join a start-up company and later won the "Greencard lottery", giving him US permanent residency and enabling to start his own business.

"SnappyCam hit the No. 1 paid rank in the Apple App Store in 15 countries and within the top No. 10 rank in 60 countries," he said in September.

"As a start-up founder and independent developer, that's what dreams are made of."

SnappyCam turns the iPhone camera into a high-powered photographer's dream.

It lets people take at least 20 full-resolution photos every second, snapping at a speed not possible with the phone's in-built software.

Congratulations are in order to Yianni, another (Greek) Australian success.

What indeed needs to be examined is something that may have the conspiracy 'theorists'  or 'factologists' (colloquial term for a person dealing with 'facts') talking for a little while, is that an external source has developed this 'technology', where in the heart of Apple, hardware and software engineers that are paid hundreds of thousands of dollars annually have not used this 'feature'.

Apple is notorious for thwarting the technology used in their products and/or locking or disabling technology used by Original Equipment Manufacturers, e.g. Bluetooth, much to the disadvantage to the consumer.

Each generation of Apple products is surpassed by features offered by Apple's rivals, e.g. Samsung, a fact that is reciprocated in sales figures.