The world's so-called authority on climate change engages in exaggerated science and has become a political tool. 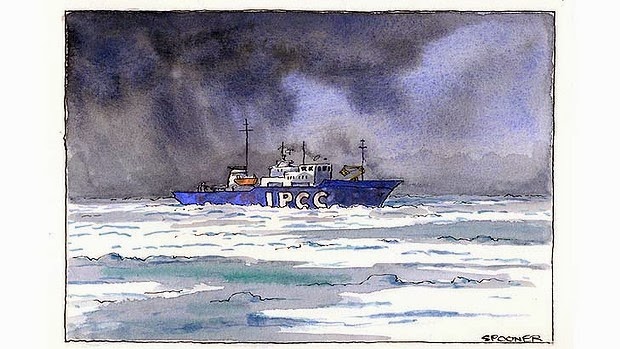 We've recently seen comments about climate matters from Maurice Newman, the chairman of the Prime Minister's Business Advisory Council, and David Karoly, professor of atmospheric science at the University of Melbourne and a member of the Climate Change Authority.

Newman wasn't completely correct about the Intergovernmental Panel on Climate Change and Karoly failed to mention some critical issues about the IPCC's operation and function. The IPCC certainly has faults and its publicity material doesn't always accord with the facts, but the bigger issues are its narrow charter and how various bodies encourage us to believe that the IPCC is an authority on all climate matters.


Journalists are supposed to be sceptical about all claims on all matters but that scepticism is usually absent when dealing with climate issues.


The IPCC's charter from the outset has been ''to assess on a comprehensive, objective, open and transparent basis the scientific, technical and socio-economic information relevant to understanding the scientific basis of risk of human-induced climate change, its potential impacts and options for adaptation and mitigation''.

The IPCC's focus is therefore very specific - any human influence on climate. It has no mandate to examine other causes of climate change. IPCC assessment reports claim that the human influence is significant but look closely and we find the claims are based on the output of climate models that the IPCC admits are seriously flawed, that the IPCC often asserts a level of certainty that the data cannot sustain and that as ''Climategate'' showed us, a clique of scientists has in the past sought to control the material cited by these reports.

What starts out being a scientific report becomes a political instrument because after a hard-core group of IPCC supporters draft the Summary for Policymakers, government representatives discuss, negotiate and eventually agree on the wording of each sentence. The scientific component of the report is then modified to better align it with the thinking of government representatives.

If the IPCC reports were accepted for exactly what they are - exaggerated science with a large dollop of politics - this would be the end of the matter. Unfortunately, various bodies actively encourage us to believe the reports are entirely scientific, accurate and completely authoritative on all climate matters, this despite the IPCC's charter and the political interference.

Foremost among those who imply that the IPCC has a wider remit than it does is the United Nations Framework Convention on Climate Change (UNFCCC). At its inaugural meeting in 1992 the UNFCCC declared that anthropogenic emissions of CO2 were causing significant and dangerous climate change. This statement had no factual basis. It was the IPCC's role to determine if this was correct. It certainly hadn't done so by 1992 and despite its assertions it still hasn't produced credible evidence to support that claim.

The UNFCCC's deceit continues via its annual conferences that try to pressure countries into reducing carbon dioxide emissions despite the absence of any clear evidence that warrants such action. Each conference is wrapped in a publicity blitz before, during and after the event, each time exaggerating the IPCC's findings and certainty, staying mum about the influence of politics on IPCC reports and falsely implying that the IPCC's investigative scope extends far beyond its mandate. The executive secretary of the UNFCCC is appointed by the Secretary-General of the United Nations and reports to him, which implies UNFCCC deceit is endorsed at the upper levels of the UN.

There is no higher authority to which one can complain.

Not far behind the UNFCCC we have government bodies, such as the Department of Climate Change and now-privatised Climate Commission, that ardently promote the IPCC view. In some cases these bodies were created specifically for that purpose and in most cases their action is to support government policy. As with the UNFCCC, these bodies falsely imply the IPCC's remit covers all aspects of climate science.

Next are environmental organisations, such as Greenpeace and WWF, others such as the sustainable energy industry that have vested interests and push the IPCC view, implying it's the ultimate authority on climate matters.

We should also not forget the scientists who publicly endorse the IPCC view. Ascribing a specific motive to a large number of people is futile, but among them are likely to be people holding various levels of belief and of course people whose income and reputation rest on the IPCC's position.

The public would hardly be aware of the statements made by all of the above if it wasn't for the mainstream media. Journalists are supposed to be sceptical about all claims on all matters but that scepticism is usually absent when dealing with climate issues. Whatever the cause, journalists appear unwilling to question claims, unwilling to ask for the data so they might verify the findings and unwilling to follow-up predictions to see if they were correct. The silence on all these matters tacitly and falsely implies that the IPCC's view is correct and it's an authority on all climate issues.

The reality is that the IPCC is in effect little more than a UN-sponsored lobby group, created specifically to investigate and push the ''man-made warming'' line. With no similar organisations to examine other potential causes of climate change, it's only the IPCC voice that is heard. But the IPCC's voice isn't heard in context and with all the necessary caveats; it's distorted via the UNFCCC and others who imply that the IPCC is the sole scientific authority on climate matters.

Of course those with vested interest support it, which include governments, politicians, government bodies, ''green'' groups and many scientists. Ultimately it's the unquestioning media, or perhaps a media unwilling to admit that the UN and its agencies might be dishonest or wrong, that misleads the public into believing the IPCC is something it's not.

John McLean is the author of three peer-reviewed papers on climate and an expert reviewer for the latest IPCC report. He is also a climate data analyst and a member of the International Climate Science Coalition.

The policy in Australia called the 'Carbon (dioxide) Tax' punishes the masses for industry created so called greenhouse gasses.
Another fraud by government to line the pockets of politicians and their industrial 'brethren'.
Posted by AuCorp at 4:29 PM