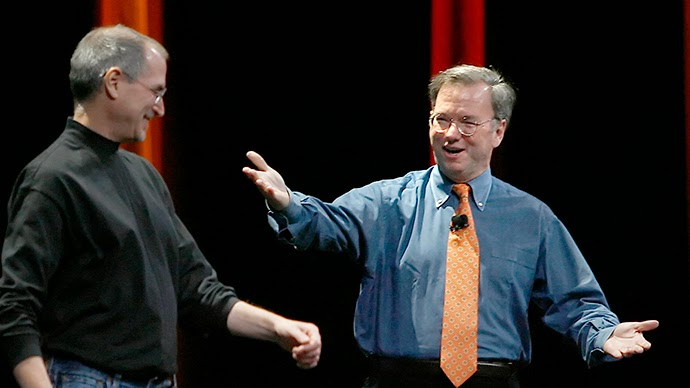 Two of the most powerful people in the technology world secretly and perhaps illegally coordinated business strategies in which they agreed not to poach each other’s employees, thereby keeping salaries low, according to emails unveiled in federal court.

Apple founder Steve Jobs and Google CEO Eric Schmidt apparently kept a secret pact to institute a “no-hire” policy in which each executive promised not to recruit each other’s workers. Yet the tech superstars are just two of the business leaders to be implicated in the wink-wink agreement, which reportedly included Google, Apple, Intel, Adobe, Intuit, and Pixar.

According to Pando Daily journalist Mark Ames, the scheme began in early 2005, when the need for Silicon Valley engineers was at an all-time high. The deal’s consequences became so pervasive that the US Department of Justice launched an antitrust investigation in 2010, which laid the groundwork for a class action lawsuit filed on behalf of more than 100,000 Silicon Valley employees who allege they were deprived of over $9 billion since 2000.

The US 9th Circuit Court of Appeals refused to throw out the class action suit over the objections of executives at Apple, Google, Intel, and Adobe. The emails in question were unsealed Tuesday by Judge Lucy Koh, the same judge who presided over the Samsung-Apple patent lawsuit.

Jobs, who died in 2011, seems to be the principal architect behind the illegal conspiracy. Yet Schmidt, according to an email from Google senior advisor Bill Campbell dated February 27, 2005, “got directly involved and firmly stopped all efforts to recruit anyone from Apple.”

Schmidt is also said to have told his Senior Vice President for Business Operation Shona Brown to only mention the pact “verbally, since I don’t want to create a paper trail over which we can be sued later.”
Google founder Sergey Brin was also strong-armed when he approached members of Apple’s Safari team about working for Google. Jobs, in an emailed quoted by Pando Daily, cited the “gentlemen’s agreement” when threatening Brin, stating: “If you hire a single one of these people that means war.”

“Mr. Jobs also suggested that if Palm did not agree to such an arrangement, Palm could face lawsuits alleging infringement of Apple’s many patents,” Colligan said.

Colligan swore he told Jobs the scheme was “likely illegal” and that Palm Inc. – a computer hardware firm eventually obtained by HP – would not be “intimidated” by a patent battle.

“If you choose the litigation route, we can respond with our own claims based on patent assets, but I don’t think litigation is the answer,” Colligan testified to telling Jobs, as quoted by Reuters.

A jury trial has been set for May 27 in San Jose, California

Another secret deal with a conspiracy to implement  a global low wage policy.

The purpose of globalisation is to implement slavery on a worldwide scale controlled from a central location policed worldwide.

It would be interesting to see how the courts deal with this matter.