In the words of a high profile Melbourne lawyer who is responsible for bribing judges / police prosecutors and others in order for his clients to avoid jail;

"There are two types of people who are in prison, those who do not have the money to pay for a lawyer, and those too stupid to pay for one".

Many high profile criminals have been able to escape a jail sentence, and continue to operate under the watchful eye of the corrupt police heads and their 'foot soldiers' in Victoria.

To the uneducated public, one might be under the impression that if all forms of resolution to a dispute have failed, then taking the matter to the "Supreme Court of Victoria" will result in justice prevailing once the truth is told.

In Australia, the courts are not courts of 'law', but rather places of business/trading/commerce (trading on your ESTATE NAME) which have ABN's (Australian Business Numbers), which in the example of the County Court of Victoria (ABN: 32 790 228 959), is owned by the Liberty Group, which has financial ties to the Rothschilds.

Unbeknown to the public, judges/magistrates/judicial clerks bid for matters, which are paid for by securitised bonds.

Matters are already decided before the 'official' commencement of the matter, which appears in the daily law list. 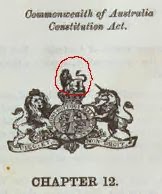 The company logo or in this case, the Coat of Arms is another aspect that escapes the notice of mere mortals.

The Coat of Arms with the lion and unicorn as in the "Commonwealth of Australia Constitution Act 1901" document pertains to the only valid version of the 'Constitution', where it is also part of a seal, which is the ONLY valid seal for any Act.

The kangaroo and emu Coat of Arms which is pictured on another version of the so called 'Constitution' is NOT part of any valid laws, and that particular Constitution is NOT VALID, contrary to popular belief.

The Supreme Court of Victoria, has its own logo, which looks very similar to that of the original one from the 'Constitution' with one very important difference.

The Coat of Arms contained in the "Commonwealth of Australia Constitution Act 1901" has a lion sitting atop of the Crown.

This refers to the habeas corpus, which is valid and in force in Victoria (a fact that the 'authorities do not want the masses to know) and expresses that:

“No Freeman shall be taken, or imprisoned, or be disseised of his Freehold, or Liberties, or free Customs, or be outlawed, or exiled, or any otherwise destroyed; nor will we pass upon him, nor condemn him, but by lawful Judgement of his Peers, or by the Law of the Land”

When stepping into the jurisdiction of the business known as the Supreme Court of Victoria, there is no lion atop of the Crown, which quite simply translates to in lay mans terms is that you are guilty and MUST prove your innocence.

Not one single judge has an impartial perspective but rather a vested interest, as the payment of the judge depends on the resolution of your matter, which must be judged in a manner that is first and foremost to the benefit of the system.

Every single so called judge that presides over any matter  is factually corrupt, in contempt of court and should realistically be arrested.

As a side note:

The Australia Act 1986 is INVALID.

This has been established in 2006 within the County Court of Victoria, and thus is Ultra Vires in the main as it does not comply with section 128 of the Commonwealth Constitution Act, to which the crown conceded to this fact.