What is a Birth Certificate?

Your birth documentation should be straightforward and transparent, however it soon becomes the most complex and secretive paper trail imaginable. This alone suggests a long history of corruption. The process involves a maze of secret Trusts and various parts of legislation, focused on claiming your Estate.

The modern “Birth Certificate” began as a “Settlement Certificate” issued in England in 1837 to officially record the poor (paupers), granting basic rights to benefits in exchange for recognition of their status as owned “property”, lawful slaves, also known as indentured servants and bondsmen. A child’s birthplace was its place of “settlement,” where its bond began. Thus, a “settlement” is equivalent to a voluntary slave plantation. Since 1933, all New Zealanders have been required by statute to have a Birth Certificate, and a tax identification number. Since 1990, under the United Nations and the World Health Organisation (WHO), by the Convention on the Rights of the Child, the birth certificate process has become an international system of “settlement”.

When you are born (given life), a “Record of Live Birth” is created as prima facie evidence of your Life. The New Zealand equivalent is a “Notification of Birth for Registration”. It is your Affidavit of Life, with details that absolutely identify your living standing. It records your given name as a unique “Title”, i.e. John, to your Estate. The autograph of your Mother establishes the origin of your Estate (an Estate must come before a Trust). Your Mother and the State are now, by law, Trustees in an “expressed” Public Trust, of which you are the Beneficiary. You are the holder in “expectancy” of your Estate, which will descend to you as of right when you attain the “age of majority” (20). This original Trust should serve you well, but …

Soon, your parents are told that you “must” be registered. They are under no such lawful obligation, but the State is very insistent for reasons undisclosed. According to Ecclesiastical Law an Estate can only be held in Trust by a man. But your Mother was asked for her maiden name, constituting “Maternity”. [MATERNITY. It is either legitimate or natural.

The former is the condition of the mother who has given birth to legitimate children, while the latter is the condition of her who has given birth to illegitimate children. Maternity is always certain, while the paternity (q.v.) is only presumed. - Bouvier's Law Dictionary, 1856 Ed.] Therefore, all naturally born children are illegitimate (bastards) with uncertain fatherhood, having no paternal holder of their Estate. When registering, an “Informant” (unknowingly) makes an accusation as to your illegitimacy. [INFORMANT. A person who informs or prefers an accusation against another. - Black's Law Dictionary, 2nd Ed.] The Status of Children Act 1969, 2. says ‘For the purposes of this Act marriage includes a void marriage’. So you are legally a bastard without rights. [BASTARD. 4. Considered as nullius filius, a bastard has no inheritable blood in him, and therefore no estate can descend to him. - Bouvier's Law Dictionary, 1856 Ed.] Moreover, your given name (Title) is recorded in the “still-born” column. [A stillborn child is one … incapable of living … if they do not in fact survive so long as to rebut this presumption of law, they cannot inherit. -

Black's Law Dictionary, 2nd Ed.] The State can now legally claim your Estate, making you a “Ward of the State” in an “estates for life” Foreign Situs Trust. [ESTATE. 9.-2. The estates for life created by operation of law are … 4th. Jointure. … The estate for life is somewhat similar to the usufruct of the civil law. - Bouvier's Law Dictionary, 1856 Ed.] “Jointure” (joinder) is similar to “usufruct” (right to derive income from property of another).

Your Record of Live Birth, and the Registrar’s evidence, are used to create a Birth Certificate Bond, publicly certifying that a property Title is registered as a Security for the national debt. It is like a Warehouse Receipt for the baby, the delivered goods. [WAREHOUSE RECEIPT. A warehouse receipt, which is considered a document of title, may be a negotiable instrument used for financing with inventory as security. - Black's Law Dictionary, 7th Edition]. At the same time, the bond converts your given name and family name into a tradename. Only corporations have a “last name”. A legal person has been created by the State, as a franchise child of the parent corporation.

The Bond is sold to the World Bank (Bank of International Settlements, created in 1931 by the Vatican) as Settlor of the Trust. Your weight in ounces on the Record of Live Birth is to calculate your market value relative to gold. Your Bond becomes a registered Security, which the Treasury uses as Surety for Treasury securities such as Treasury Bonds, Notes and Bills.
So you have been MONETISED. The people truly are the “Credit of the Nation”. However, in the corrupted system, the people’s credit is effectively “human capital”, or “livestock”.

Although the State can seize the legal person baby as a “Ward of the State” if the State’s “investment” is threatened, its greatest value is realized from the “matured” working adult.

The perpetrators of this deception know that you could one day discover the truth and invoke your Power of Attorney from the age of 18. Property Law Act 2007, Section 22.(1) ‘Person between 18 and 20 years may do certain things, … (c) accept appointment, or act, as an attorney, 22.(2) … has the same effect as if the person were 20 years old.’ In short, you can attain the age of majority (20) by declaring your own Power of Attorney from the age of 18. However, if they can somehow “kill” you off, legally speaking, they can claim your “deceased Estate”, being your real property (lands), and personal property (life).

This is why the legal person is legally a “vessel” in which the State has a Security interest, via the Birth Bond. When you reach full legal age, you become the Master (Mr/Mrs/Ms) of that “vessel”. The living you has “gone to sea”, and under the Admiralty Maritime jurisdiction, which is the “Law of the Sea”, if you are missing for seven years, you can be declared legally dead by the court. The same process is applied to ships and mariners lost at sea.

But you will probably “voluntarily” forfeit your Estate. You may start work and register as a taxpayer on a IRD330, or you may enroll on a voting register. Either way, you are transferring your Estate to the State’s legal person by registering as an “accommodation party”. If you decide not to register as the legal person, you are a “vessel lost at sea”.

After seven years, you “died” without a will “Intestate”, so someone is appointed to manage your Estate/Trust. The Public Trust applies to the Family Court to manage your Estate under the ‘Protection of Personal and Property Rights Act 1988, Section 11. Form PPPR 6 Application for order to administer property’.

Under the first Sovereign Public Trust agreement set up by your Mother, you are the Beneficiary, while your Mother and the State are your Trustees. The State employees are your Public Servants obligated to work for your benefit and defend your rights, having a Fiduciary responsibility to do so. But under the new Foreign Situs Trust, the government becomes the Beneficiary, and you become the Trustee obligated to work for the Trust, because the Trustee always pays. The State has turned the tables on you.

The People are employed by the State as debtors for a private banking system, which is upheld by a private Bar Association Guild (Law Society). While “acting” as the Trustee of the Foreign Situs Trust in your corporatised NAME, you will receive endless presentments (bills), which that employee of the State, the legal person, Strawman, is obliged to pay.

But the theft of your Estate is based on false presumptions that cannot be proven in fact.

The fundamental flaw is that in order for a Birth Certificate to be issued, a man or a woman must first have been born on the land. Plainly, you are not really dead, so you still have living rights on the land. You are “the holder in due course” of YOUR Estate Title.

Under the Cestui Que Vie Act 1666, IV ‘If the supposed dead MAN proves to be alive, then the title is revested.’
Remember that only YOU have a “birthday” on which you were born into the world from your Mother. Whereas the artificial legal person has a “date of birth” on which it was registered by the Registrar. They are usually created on different dates! (see your Registration Print-out)

Maxim of Law: “He who fails to assert his rights has none”. 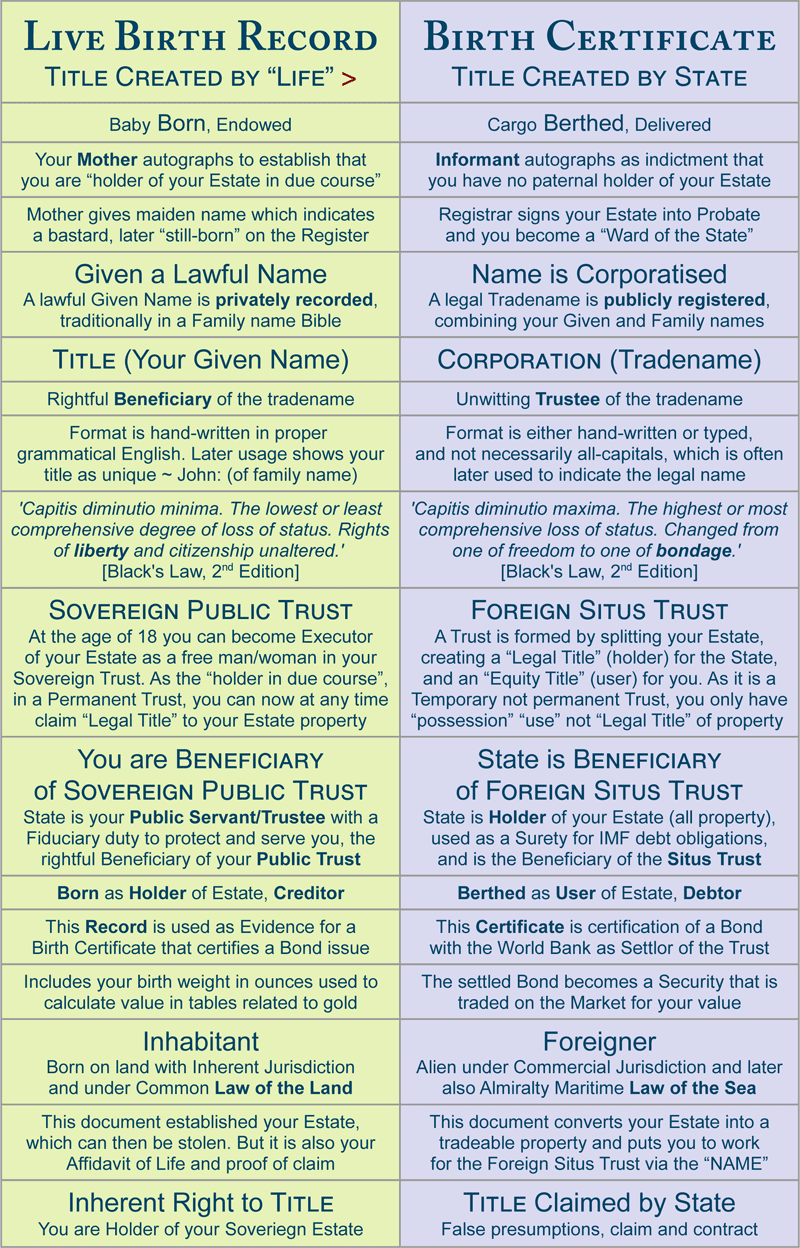 Fantastic version a must read

Is this the same process in Australia?
Cheers Stavo

can I suggest http://larryhannigan.com/index.htm for more information on this subject.

What it mean if u do that what u did