When is a child not a human?

An article from news.com.au appeared with the headline:

Is is ever ok to kill a child?

Relating to a story of euthanasia in Belgium. See illustration below. 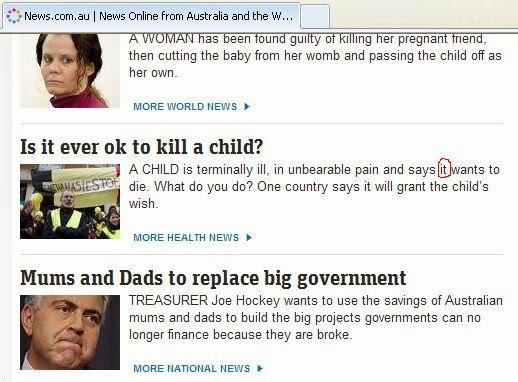 The rest of the headline article reads:

A CHILD is terminally ill, in unbearable pain and says it wants to die. What do you do? One country says it will grants the child's wish.

The author of the article, who has not been named, is referring to a child as an 'it', an inanimate object.

Is this really true?

In Australia, in the workforce, a person or human being is referred to as a resource, an inanimate object.

A very little known fact to the general populous is that when a child / person / human being is born in Australia, 'it' is the property of the 'Crown'.

You are given a label which is CAPITALISED, e.g JOHN MANFRED CITIZEN.

You are no longer a 'person' but a CORPORATE entity, and that's what you are sentenced for.

How the government owns your children at: