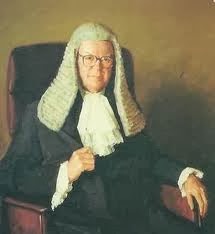 The following document is from the Chief Justice of the High Court Australia written to a Mr. John Wilson commenting on the Constitution.

He was known as one of Australia's leading federalist judges although he presided over the High Court when decisions such as Koowarta v Bjelke-Petersen in 1982 and Commonwealth v Tasmania expanded the powers of the Commonwealth at the expense of the states.

Gibbs dissented from the majority verdict in both cases. Read Profile Wikipedia.