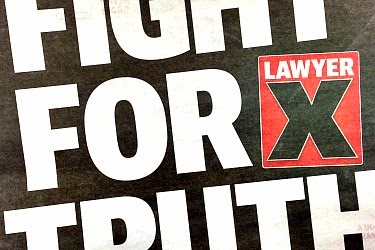 As the Herald Sun learned dozens of cases are being reviewed in the wake of the Lawyer X scandal, the state’s Independent Broad-based Anti-corruption Commission confirmed it had requested information from Victoria Police.

IBAC Commissioner Stephen O’Bryan, SC, said he was seeking information from Victoria Police to determine whether there had been any potential police misconduct.

“The public demand confidence in police. If there has been police misconduct, we will further investigate this thoroughly and fairly,” he said.

The Herald Sun has been told several convicted criminals have inquired of their lawyers whether they could lodge appeals.

Police are also understood to have flagged with prosecutors that convictions in more than a dozen cases could be in jeopardy.

An IBAC spokeswoman said IBAC had been briefed by Victoria Police late on Thursday.

She said its probe into the Lawyer X scandal had not been prompted by a complaint.

Asked on ABC radio if there should be a review to ensure cases hadn’t been jeopardised by police, Attorney-General Robert Clark said: “You’re begging a lot of questions.”

“I think it’s best just to say that these are matters that are now before the courts, and they’re matters of police operations under the responsibility of the Chief Commissioner,” Mr Clark said.

“And of course, Victoria also has an independent oversight body, namely IBAC, with powers to investigate all instances of police misconduct, with powers similar to that of a royal commission,” he said.

Mr Clark was also asked whether there was a need “for any previous cases, gangland cases, to at least be reviewed. Or do you think there’s a need for that?”

He replied, “Regulation of the legal profession is undertaken by the Legal Services Commissioner, and again, that’s an independent office that’s been of long standing.”

Premier Denis Napthine called on anyone with information  about the scandal to contact IBAC.

“And IBAC have the powers we have given them, equivalent to a royal commission.

“This is a standing opportunity for people to report any misconduct or any of their reasonable suspicions.”

Mr O’Bryan also called on anyone with information on the Lawyer X scandal to contact IBAC.
“IBAC is entirely independent of the police, and we will assess any information provided to us carefully and in strict confidence,” he said.

Mr O’Bryan said IBAC was also liaising with the Legal Services Commissioner, Michael McGarvie - who is responsible for policing misconduct in the legal profession - as well as the Director of Public Prosecutions, John Champion, SC.

Victoria Police is a corrupt organisation, that does not follow the law, but rather operates in such a manner that is beneficial to the corporatocracy that it is subservient (employed by) to.

Victoria Police is the new solicitor (one that seeks trade) for the courts in order to 'charge' the law abiding person for financial benefit to the courts, simultaneously cataloging the 'criminals'.

The 'justice' system is in collusion with the criminal activities of Victoria Police, supporting the illegal activites.

The actions of the authorities not only follow but are right on track with the 'Nanny State' agenda.