Kangaroo Courts of Australia are star chambers contrary to law

Whether the law in Australia is Martial, Roman, or strictly contractual, one thing is for sure the law that came with the 'first fleet' also included the entrenched laws of Great Britain.

Some of these laws are transcribed or hidden in other Acts.

The current state of the Australian (Kangaroo) court system is that it is a star chamber, contrary to current laws, as defined in for example in Victoria's legislation, in the Imperial Acts Application Act (1980) Section 8

An Act for the regulating of the privy council, and for taking away the court commonly called the star-chamber. 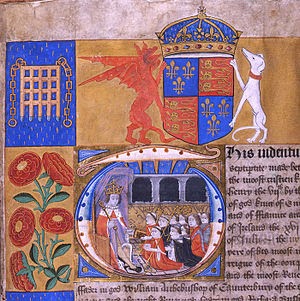 (illustration: A document of 1504 showing King Henry VII sitting in the Star Chamber and receiving William Warham, Archbishop of Canterbury, Richard Foxe, Bishop of Westminster, and clerics associated with Westminster Abbey and St Paul's Cathedral, as well as the Mayor of London.)

The Star Chamber (Latin: Camera stellata) was an English court of law who sat at the royal Palace of Westminster, from the late 15th century to the mid-17th century (ca. 1641), and was composed of Privy Councillors and common-law judges, to supplement the judicial activities of the common-law and equity courts in civil and criminal matters. The Star Chamber was established to ensure the fair enforcement of laws against socially and politically prominent people so powerful that ordinary courts would likely hesitate to convict them of their crimes.

Court sessions were held in public, although witnesses and defendants were examined in secret.[1] Defendants were given prior notice of the charges against them, and had the right to be represented by an attorney.[2] Evidence was presented in writing. Over time, the Star Chamber evolved into a political weapon, a symbol of the misuse and abuse of power by the English monarchy and its courts.

In modern usage, legal or administrative bodies with strict, arbitrary rulings and secretive proceedings are sometimes called, metaphorically or poetically, star chambers. This is a pejorative term and intended to cast doubt on the legitimacy of the proceedings. The inherent lack of objectivity of politically-motivated charges has led to substantial reforms in English law in most jurisdictions since the 17th century.