After reading the posts from the Corporate Australia (corpau.blogspot.com) blog on Victoria’s sheriff, Brendan Facey and his (alleged) office of employment ‘Sheriff’s Office’ and now the ‘Sheriff’s Office Victoria’ (which are two different business entities, under two different jurisdictions - See Corporate Australia blog article: There’s a new sheriff in old Melbourne town) the readers should be aware that according  [to their many other invalid] Acts, the Sheriff Act 2009, where Victoria’s sheriff allegedly get his powers of incarceration, detainment and seizure of goods is invalid. 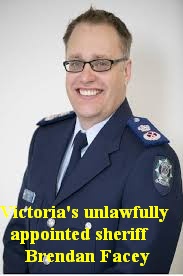 It is also important to point out that there is no lawful appointment for the current so called ‘sheriff’ Brendan Facey (see above meme).

Having said the above, there can be no lawfully generated warrant for road offences as a result from a place of business/trading/commerce called the ‘Infringements Court’.

If you have had dealings with the sheriff, Brendan Facey or any other person from the ‘Sheriff’s Office’, or anyone claiming to be a ‘deputy’ –

ASK FOR THE WARRANT!

The short answer is that you will not be provided with one.

The longer answer is:-

If you actually do get provided with a warrant, it will NOT be a LAWFUL one.

Anyone understandably connected to Civic Compliance Victoria(Tenix) is a Zionist/Vatican Order figure.