Apparently according to the corporate media, Aussie footballers are 'heros' and 'stars' and should be looked up to (by the children of the cannon fodder)?

The ancient game of throwing a ball / Chrisitan's head / rock, has been on the scene for quite some time, even dating back to neanderthal times.

Well it looks like those 'neanderthal times' are alive and well within the 'culture' of Australian football (see illustration below of Dustin Martin). 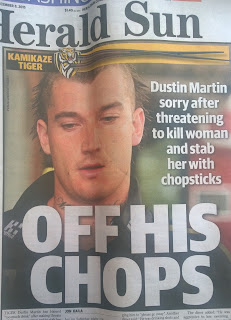 The pissed Aussie bogan / moron / f^ckwit who calls himself a 'footballer' can get away with threats intimidation AND the all time favourite (of footballers) being derogatory towards women.

But remember folks - You're AUSTRALIAN if you're not a 'footy fanatic'.

More like you're 'unAustralian' if you don't know the 'Australian Constitution'.