Australian police to use sonic weapons to maim the people as they are the enemy of the state.


So apparently in Australia, the people are told that they live in a 'democracy'.

The people allegedly are supposed to have a 'freedom of speech'.

The people are also allegedly allowed to protest, where the focus could be on government or corporate misbehaviour (read fraud).


Also the herd populace for now, have some sort protection with the help of entrenched U.K laws under a system of rule from the monarchy, which does not sit well with certain people, hence the push for a republic, but that alas is another dozen or two posts.

What the majority of people do not realise is that Australia is still a British colony, where this is reflected in certain instances of law, other than the private, commercial, administrative, maritime or mercantile laws that also operate in this country.

So in a penal colony the mass populous is the enemy of the administration.

Any form of protest is to be extinguished.

"But that's a conspiracy theory you tin foil hat nutter",
bleats a member of the 'beer and footy' herd mob.

Under the banner of 'innovation' which should read 'slavery' you can 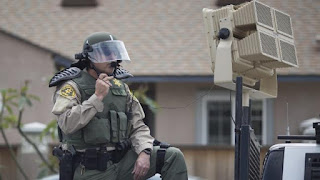 A Los Angeles County Sheriffs deputy stands ready to use a sound cannon, or Long Range Acoustic Device (LRAD), against protesters near a Donald Trump campaign rally on May 25, 2016 in Anaheim, California Picture: David McNew/Getty Images/AFP


A SONIC weapon that can permanently damage people’s hearing is being rolled out across world and Aussie police now have them in their anti-protest kits.

Long range acoustic devices (LRADs) are often referred to as sound cannons and have been used against protesters in the US with damaging impacts, with some saying they should be considered weapons.

Although many people in Australia may have never heard of them, police in many states count the devices as part of their arsenals.

Protesters were warned about the use of LRADs ahead of the G20 in Brisbane in 2014, which some community groups described as an “exercise in intimidation”.

Initially designed for military use, the LRADs were used to keep pirates away from ships and have been used in warzones in Iraq and Afghanistan to lure people out of buildings into the range of snipers.

The device, which looks like a satellite dish and is often mounted on an armed vehicle, can emit an extremely loud, piercing sound that is very disturbing to humans. This makes them very good at dispersing crowds.

Ms Piper was blasted with the LRAD while taking footage of a G20 protest in the US town of Pittsburgh, where the device was used in 2009. Authorities played the piercing noise at the highest setting for three minutes, instead of for 30 seconds at the lowest setting.

“The initial thing I felt was pain, I thought my eardrum had ruptured,” she said. “Then I felt dizzy and nauseous and disoriented.”

Prof Piper said she had bad ringing in her ears for a year that drove her crazy but more seriously, she discovered she also had permanent hearing loss.

“It’s actually nerve damage ... and those nerves will never recover,” she said.

The English professor was the first person to sue over the use of a LRAD and eventually reached a settlement with the City of Pittsburgh for $US72,000 ($AU99,255).

“I was really mad that this had happened to me when I was just down there, this innocent bystander,” she said.

Prof Piper said she didn’t think the devices should be allowed.

“I have to live with this for the rest of my life ... why is it okay to say we can use this against our own citizens?”

Her experience highlights one of the main problems with the device, as it will blast anyone in its vicinity, regardless of whether they are the target. 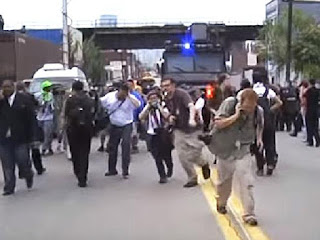 An LRAD being used on G20 protesters in Pittsburgh in 2009Source:Supplied

“The LRAD is indiscriminate, whoever happens to be in the way of the soundwave is equally likely to be affected,” Dr James Parker of Melbourne University told ABC.

“At least a baton in principle should be aimed at somebody, while the LRAD is aimed at everybody.”
The LRAD is marketed as a communication device, not a weapon, which is key to its saleability. This has enabled the US sell the devices to China, as well as the UK and South America.

A number of police departments in Australia confirmed to news.com.au they have LRADs and all said the devices were used for their loudspeaker ability. No one mentioned whether the high-pitched “alert” function had been used.

Queensland, Victoria, Western Australia, South Australia as well as the Australian Federal Police, all confirmed they have an LRAD.

Northern Territory would not comment to ensure it did not “compromise policing methodologies or tactics”.

Western Australia Police said it could not make a comment on “specialist equipment”.

Tasmania said it did not have an LRAD.

NSW Police did not respond to inquiries.

Of those authorities that did respond, they described the use of the LRAD as performing the function of a really powerful, expensive loudspeaker.

Queensland Police said it currently had 15 LRADs in operation, and have had the device since 2009.
A spokesman said they were purchased for their use in negotiation during high risk environments as a form of communication.

“LRAD’s have been used on numerous occassions at high risk incidents to communicate with persons in crisis,” he said.

However, he did not say whether the siren had been used, only that it was used “in accordance with manufacturer’s instructions when conditions allow this to occur”.

“These instructions ensure no damage to hearing to anyone involved,” he said.

South Australia Police said it has had two devices since 2011.

“One has an amplification range of approximately 200 metres and the other a range up to 3km,” a spokeswoman said.

“The devices can be used in a range of situations to communicate and amplify messages and tones over some distance during incidents including primarily search and rescue, protest activity, high risk negotiation and mass casualty.”

Victoria Police said its critical incident response team had LRADs to enable negotiations with suspects when it was too dangerous for a negotiator to be in a closer position.

“CIRT have used the devices on a number of occasions. There are strict guidelines in place and they are only used by trained negotiators,” a spokeswoman said.

The Australian Federal Police said its officers had never used the device to disrupt or disperse crowds.

“This is useful in situations where it is deemed an unacceptable risk, or there is no ability for the AFP to engage in face-to-face negotiation,” a spokesman said.