So apparently some "executives", "directors", "analysts and experts" reckon that Apple is the most "admired" company in the world.

So let's do a recap on what Apple does again:


and plenty more dishonest behaviour, but according to some people it's the most admired company in the world.

Note: We do not recommend the purchase or use of Apple products.

Read article from 16 Feb 2017 by phonearena.com of the title: 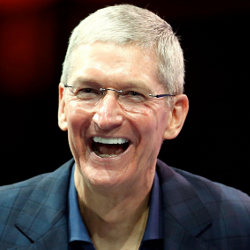 For the tenth consecutive year, Apple has been named the most admired company in the world. The honor that was bestowed on the tech titan is based on the opinions of 3,800 executives, directors, analysts and experts. Rounding out the top five are Amazon, Starbucks, Berkshire Hathaway, and Disney. Other tech firms in the top ten include Facebook and Microsoft. Besides being the most admired company on the planet, Apple is also the most valuable company on this rock with a market capitalization (share price multiplied by outstanding shares) close to $700 billion.

To make the list, a company has to be among the top 1,000 U.S. firms in terms of revenue. To that list, 500 international firms with revenue of $10 billion and more are added. Eventually, the list is cut to 680 firms across 28 countries. The contenders are then ranked on things like innovation, quality and social responsibility.

Apple's rise to the top of the most admired company list happens to coincide with the 2007 launch of what is arguably its most famous product ever, the Apple iPhone. Apple is expected to celebrate a decade of iPhone by offering a 10th anniversary model that at last report will feature a 5.15-inch OLED screen (breaking new ground for the device). The glass will cover the entire front of the phone.