The agenda for forcing enticing people to use smart phones is so that they can be monitored more easily which leads to greater control.

With every stroke of Her Most Excellent Majesty Queen Elizabeth II's purple pen to the Royal Assent to laws of this colony, the people are having their rights(whatever was left of them) or privacy or freedom of movement taken away from them and enslaved even further.

Apparently the people in government have thought of an idea whereby a business called Centrelink  that is handing out government welfare payments to the people, have some sort of magical powers that lawfully allows Centrelink to hack your smart phone.

Smart phones are the gateway for governments and business to covertly eavesdrop into your private and confidential home life.

No wonder the corporations want you to buy a new phone every year, where you pay from $300 - $1200 for a government surveillance tool that the government does not have to fork out the dollars for. Brilliant 'marketing' strategy.

It seems that the most serious 'fraud' is committed by people in 'government', but then again aren't they untouchable?

Can YOU make criminal charges stick against a politician fraudster AND incarcerate that 'person'?

The Police State of Australia in full swing.

Here is what the Fairfax publication wrote on 30th of June 2017 on this topic of the headline:

The agency says it uses the technology in strict accordance with the law and only when it has obtained a warrant when investigating cases of serious fraud. 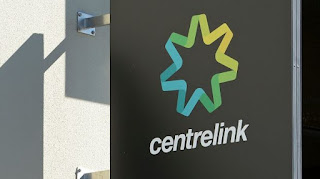 The Department of Human Services, which oversees Centrelink, has spent $32,249 on Cellebrite products in the 2016 / 2017 financial year. Photo: Bradley Kanaris

But experts have warned the use of the 'Universal Forensic Extraction Devices' is jeopardising the communications security of Australians.

The welfare agency has joined other government outfits including the Australian Taxation Office and the Employment Department in using the extraction devices, which allow users to bypass security features on smart phones and extract data, including messages and call logs.

Centrelink and other agencies are not using the devices to listen in on their clients' telephone calls and investigators must have physical possession of the phone to be able to use the UFED.

The technology, developed by Israeli company Cellebrite, gained global attention in 2015 after it was believed to have helped the FBI crack the iPhone of San Bernardino terrorist attacker Syed Rizwan Farook.

But Deakin University criminologist Adam Molnar said the use of Cellebrite technology by Centrelink was concerning and an overreach.


"I would say that's a blatant misuse of this particular solution," Mr Molnar said. 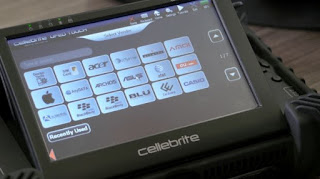 The Cellebrite system can extract data from a variety of phones. Photo: Tessa Stevens
"I think this is a classic case of function creep.

"If Centrelink is using this technology then they should be forthwith about the specific circumstances under which they're using these sort of mobile hacking technologies." 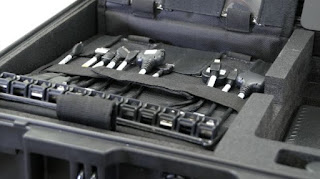 The Cellebrite system has a cable for every phone on the market. Photo: Tessa Stevens

Do you know more? Get in touch via finbar.omallon@fairfaxmedia.com.au or using the app Signal on your smart phone via 0437 464 126.


I would say that's a blatant misuse of this particular solution. I think this is a classic case of function creep.
Deakin University criminologist Adam Molnar

A spokesperson for the department said Cellebrite devices had been used "less than 50 times" during the financial year.

"The technology is only used for evidence collection during warrants for serious non-compliance and fraud cases," the DHS spokesperson said.

Warrants were issued under the Crimes Act and executed on the department's behalf by the Australian Federal Police, which also possesses Cellebrite technology, according to the department.

Australian Privacy Foundation chair David Vaile said the use of this technology, originally justified to fight terrorism or child pornographers, was becoming more routine and broader.

"If it's a boiling frog, at each stage the water is made warmer," Mr Vaile said. "The definition of what is a quote 'serious criminal offence', that's sort of a moving target."

"[Law enforcement] haven't understood the battle is being lost about IT security and they're contributing to it by normalising the idea."

"To learn that you have additional government agencies, such as the ATO and Centrelink, relying on Cellebrite solutions, then I think it's time for a much more public debate about maintaining the security and integrity of our communications infrastructure as a whole," he said.

Mr Molnar said government agencies already had access to an incredible scope of information, including metadata.

"One wonders whether there's adequate attention being given to already existing powers or other solutions that might be less privacy invasive," Mr Molnar said.

The Department of Employment said they used Cellebrite technology to determine whether fraud has been committed against the government.

"We cannot comment on specific investigations," an Employment Department spokesperson said.
The ATO confirmed they have access to the technology but wouldn't comment on why they used it.

The Australian Securities and Investment Commission said they use UFED to copy smart phones obtained under warrant, produced voluntarily or given in response to a notice from ASIC.

"The kits are mobile and can be taken to warrant or forthwith notice sites for use on location, or used within ASIC offices," an ASIC spokesperson said.