Victoria Police to cover up yet another shooting?

It looks like the masters of deception / false court statements, Victoria Police will be in full creativity mode with regards to a shooting of an innocent man and an innocent woman at a fancy dress party inside a Melbourne nightclub, Inflation.

Will they get away with it this time around?

Are there too many witnesses to intimidate?

Will security footage exonerate the victims of a police shooting?

Does the Corinna Horvath v Victoria Police case come to mind where 'justice' for the victim may take 20 years where the police bashed her senseless to a point where she could not remember her name?

The police do not take 20 years to sort out your speeding fine do they?

We urge the victims to seek legal advice in order to sue Victoria Police. 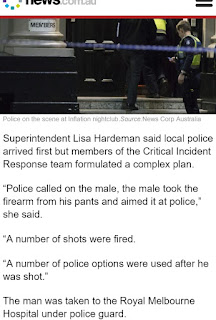 So let's take a look at some of the dodgy words used from the illustration above;

·         Superintendent Lisa Hardeman said local police arrived first but members of the Critical Incident Response team formulated a complex plan.
·         “Police called on the male, the male took the firearm from his pants and aimed it at police,” she said.
·         “A number of police options were used after he was shot.”

You can read text only version of the news.com.au article of the headline;


TWO people, including a man wielding a gun, have been shot by police at Inflation nightclub in Melbourne this morning.

Police received multiple reports a man was armed with a gun in an upstairs room shortly before 3am.
Were you there? Brianna.travers@news.com.au or 9292 1226

Reports the weapon was a toy gun are being investigated by police.

Around 100 people were at the venue but only ten on the first floor where the 35-year-old man reportedly was.

Police fired at the man after he allegedly pulled out a gun, hitting him in the torso.


The man was allegedly dressed as the Joker, a villain from the Batman franchise, at the fancy dress party.

“Police called on the male, the male took the firearm from his pants and aimed it at police,” she said.

“A number of shots were fired.

“A number of police options were used after he was shot.”

The man was taken to the Royal Melbourne Hospital under police guard.

Police say he remains in a serious condition with non-life threatening injuries.

King Street is closed off between Collins and Flinders Lane. @theheraldsun pic.twitter.com/nyAUnjZjPZ

A woman also sustained a gunshot wound to the leg and has been taken to hospital with non-life threatening injuries.

The man and the woman are known to each other.

The nightclub was having a monthly dress up party.

Bar staff emerged from the venue at 7.15am and said: “Two innocent people were shot, he had a toy gun which he declared to security.”

“The male with a toy gun was dressed as a Joker,” the bar staff told the Herald Sun.

A Facebook user who claims they work at the venue and were there last night posted regarding the incident.

“The event was a fancy dress party and the person who was shot, declared that the gun he had on his person was fake and part of his costume,” she posted.

“It was made from plastic.

“This man and an innocent bystander were shot over a plastic gun at an adult fancy dress party.”

Last night’s event is believed to be a Saints and Sinners Ball which describes itself as having: “A well-earned reputation as Australia’s, if not the world’s, raunchiest party.”

“Do not be disappointed. first in, best (un) dressed,” the website brags.