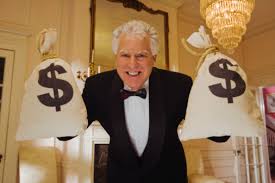 CEO's of city councils paying themselves high salaries from your rates while skimping out on services.

People should realise that in this colony we call Australia according to the law, you know the Commonwealth of Australia Constitution Act, 'municipal offices' or what we call today 'local government' or 'city councils' MUST  be a department of the state, but they are not, they have been corporatised.

See pages 935-936 from the book called the 'Quick and Garran'* or it's long name The Annotated Constitution of the Australian Commonwealth: 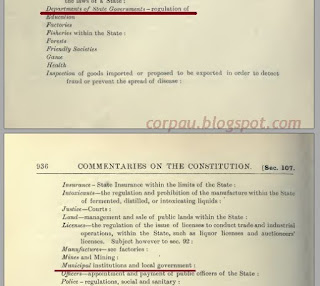 While their existence is facutally legal, it may not be entirely lawful.

For example in Victoria the Local Government Act of 1874 put together rural and metropolitan councils, where after federation the law still stood.

Today, in Victoria the legal infrastucture states that city councils obtain their power from the Local Govenrment Act of 1989.

The CEO's of 'city councils' are committing fraud against their 'rate payers' but as usual this type of fraud may never be addressed properly (i.e. all the way to the High Court) in the interest of the public.

* More about Quick and Garran.

Sir John Quick was a very prominent man in the formation of The Constitution having a substantial input into the Constitutional Conventional Debates held during the 1890s and was also very active, along with Sir Robert Garran in the creation of the book called Quick and Garran. The book, Quick and Garran is very heavily based on the Constitutional Conventional Debates and as such has become what could be considered as a 2nd reading speech in the Parliament as it sets out the purpose and reasons that The Constitution was framed in the way it was. Quick and Garran is called a book of authority and can be used in any Court in the world when relating to Australian constitutional matters. The High Court and the Privy Council has quoted from and used Quick and Garran as a book of reference on many occasions. In the case of the High Court, far too many to list, but more than 150 occasions and in the case of the Privy Council, on a few occasions.
(Source: clra.info/local_government/)


For Victorians who wish to sue their local city council see:
https://localgovernmentclassaction.com.au/

See article from 28 Aug 2019 by the Australian Broadcasting Corporation of the headline: 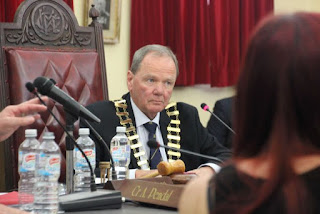 A council in regional Western Australia is the latest to join a growing list of local governments around the country to allow ratepayer money to fund defamation action against members of the public.

The Kalgoorlie-Boulder council has voted to allow elected members and staff to access funds for legal action when a constituent's comment was defamatory and targeted the person.

The council said the volume of abusive and defamatory comments was escalating and becoming more personal, particularly on social media.

"I can put up with a lot, and I have ... I think I'm defamed almost daily in this town and it upsets me that it is so vitriolic," chief executive John Walker said.

"But there are some things that have happened that go beyond that ... some of the threats, some of the comments, need to be stopped."

Mayor John Bowler said while he welcomed criticism as a democratic right, the policy change was needed.

"When there are out-and-out lies, threats of violence and hate speech that might precipitate violence, something has got to be done to stop it," he said.

While they did not detail specific remarks, one councillor said a recent Facebook comment referred to staff as "just a bunch of greedy thieves, lining their own pockets".
'Average' person not exempt from defamation

But in an academic article this year, NSW District Court Judge Judith Gibson said "ordinary members of the public form the majority of the parties in defamation".

Judge Gibson also noted that defamation court cases arising from social media comments were on the rise, while claims against media organisations were falling.

Paul Gordon, a social media lawyer at Wallmans Lawyers, said the "average person" did not understand what defamation was and "people think they can post anything online and get away with it".

"If I communicate something to you directly and there's no-one else to hear it, I can say what I like and it's not defamatory," he said.

"But the moment one other person can hear or read or see what I've said, then it is defamatory if it meets all the other tests."
What is defamation?

A defamatory comment is something that will lower a person's reputation.

If a person is sued for defamation, they may be able to defend themselves by proving what they said was true or an honest opinion.

"If I've claimed that you have embezzled funds and I have no evidence of that whatsoever, then I'm going to have a hard time in proving what I said is true," Mr Gordon said.

Under defamation law, organisations and councils as a body cannot sue over general damaging comments.

However, individual employees can sue if they have been identified through name or description.

But a New South Wales case in 1994 found a local government entity may sue for "injurious falsehood", which is considered an alternative and less common legal path.


What about free speech?

The constitution does not explicitly protect freedom of expression.

In June, former High Court judge Michael Kirby told the ABC that "Australia has less protection for free speech than any other Western country", while Judge Gibson said "the term 'defamation capital of the world' has been used repeatedly to describe the high number of defamation cases in Australia".

Mr Gordon said the influence of American culture often led Australians to wrongly believe they had a similar level of protection of free speech.

He said he did not believe the practice of using council funds to launch defamation cases was "unusual".

"In the current climate, it's not surprising that there are councils adopting these policies.

"I've personally been aware of cases in South Australia and I have heard reports of this in other states."
Ratepayers funding defamation cases

The newly formed WA Ratepayers and Residents Association said there had been a "discouraging trend" of local governments allowing the use of council money to launch defamation actions.

"I don't think it's fair for someone to make false allegations against anyone," chairman Clive Ross said.

"But for them to be able to launch an action against a resident, using effectively the resident's own money against them, is simply open to abuse and not something I believe is justified."

The Kalgoorlie-Boulder council is two months away from an election and Mr Ross said this change was being used "as a weapon".

Cr Bowler, however, denied it was an attempt to stifle debate, saying that he hoped the legal funds never had to be used and "the mere threat will stop people committing the worst of these atrocities on social media".

The WA Local Government Association said it did not collect data on these types of policies but was aware of various councils issuing cease-and-desist letters to residents.

Mr Gordon said if defamation proceedings went to trial it could be costly, running into the tens of thousands of dollars.