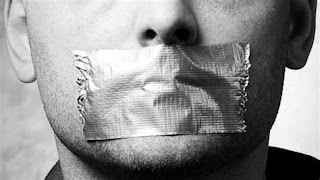 Something that resembled ‘free speech’ may have been around on the internet when it got commericalised, but those days have been over for quite some time, where now the finishing touches with a nail in the coffin have been put in.

The alleged holy grail of democracy something called free speech only existed for a short time in the virtual world, where in the 2000’s the authorities clamped down on what the serfs could publish.

With the advent of ‘social media’ the technocrats control the narrative and the words of the general population.

They are the true 'influencers' and not some stupid corporate whore showing off her ass on social media.

In a coordinated effort by U.S corporation’s with the prohibiting certain people from posting online, it seems that the First Amendment has been thrown under a bus.

So, where is the action by the so called authorities on this breach?

AS we know silence is acquiescence, so they obviously support this muzzling of people.

Once could also quite easily say about the actions of the corporations is that they are inciting violence, as the stifling of people can be a precursor to protests that can get violent with only a few strategically placed government operatives.

SO there’s no action on that too?

Members of the serf population in the police state of Victoria, Australia had their homes broken into for (alleged) posts that authorities consider incitement.

The serfs have too much ‘freedom’ in posting whatever they want or even documenting government frauds and exposing corruption within governments worldwide (e.g. Collateral Murder, Julian Assange) where this does not sit well with the overlords.

And you thought Minority Report (with Tom Cruise) was fiction?