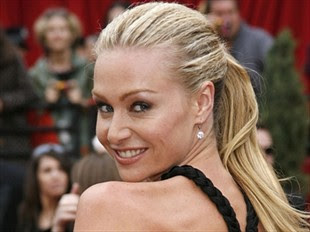 Portia DeGeneres has upset Australian media by requesting she be interviewed by female reporters.

The lesbian — who shot to fame as Nell Porter on Ally McBeal — is currently promoting her memoir Unbearable Lightness: A Story of Loss and Gain, which details her struggles with eating disorders and her sexuality.

But her request for female interviewers only has met with mixed responses, with some of the biggest names in Australian media slamming her for discrimination, The Herald Sun reports.

Channel 7’sSunrise star David Koch was offended when he was not allowed to speak to the actress, who married Ellen DeGeneres in 2008 after dating her for four years.

"If a male said 'I don't want to be interviewed by a woman', there would be a massive outcry of discrimination," Koch said.

"Obviously she has got issues and I feel quite sorry for her.

"I admire what she and Ellen have done for community tolerance and inclusiveness. But it is a real contradiction for what she stands for, which really surprises me."

Koch’s co-host Melissa Doyle ended up speaking to Portia via satellite from her home in Los Angeles.

But Fox FM’s Hamish Blake and Andy Lee were happy to ask a female presenter to conduct an interview for their drive time radio show.

The radio station told ninemsn the request related to the topics covered in Portia’s book and there were no ill feelings.

“The boys were happy to see that request put through ... Fifi Box is a friend of the show and she was more than happy to do it,” a Fox FM spokeswoman said.

The publicist for Portia’s book has not yet responded to ninemsn’s request for comment.

Portia was born as Amanda Lee Rogers in Horsham, north-west of Melbourne.

She adopted the name Portia de Rossi — inspired by a character from Shakespeare — when she was 15, explaining in 2005 that she had wanted to reinvent herself.

Portia modeled as a child before moving to Los Angeles to pursue a career in acting.

She changed her name again to Portia DeGeneres in 2010, taking her wife’s surname.

In any event is pure and simple, this is a breach of the Equal Opportunity (Act 1995 rev 41) Laws of Australia.

She should be sued for sexual discrimination.