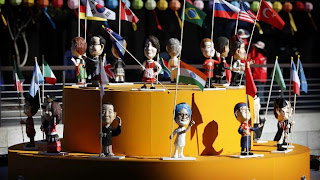 Perhaps underlining the perils of using Google to research national dress, Gillard stands proudly in dirndl costume, with one hand on her hip.

She also appears to be wearing Kumfs, or at the very least a pair of wide-fit Mary Janes that were designed with comfort, rather than fashion, in mind.

German Chancellor Angela Merkel is sporting a similar outfit to Gillard's, and also seems to have scored her red hair.

As depicted by the illustration, Julia Gillard, nothing more, nothing less than a PUPPET

Julia Gillard was FRAUDULENTLY elected by the Labour Government in a series of BRIBES, in front of the world stage, to which there was NO call for a re election from the powerful mind shaping media moguls.

How fraudulently the two businesses work hand in hand.