Show us your NBN plan, Stephen 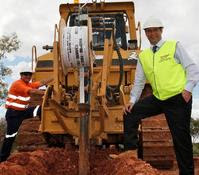 LABOR'S got its business plan for its $43bn (too much for an outdated product) broadband network, so why can't anyone else see it?

News_Rich_Media: Conroy defends NBN costingsWhile the Opposition pushes for a Productivity Commission analysis of the project, the Australian Greens are demanding the Government release the network's business plan before Parliament rises for the long summer break.

The coalition has yet to win the support of key Lower House MPs for a cost-benefit analysis of the network, but it may be a different story in the Senate.

"I think they have an obligation to put that material in the public domain while Parliament is sitting, not afterwards," he told ABC Radio today.

Senator Ludlam also wants the Government to produce its formal response to an earlier implementation study.

"We'll be demanding the minister table both of those documents before the end of this week," he said.

Opposition Communications spokesman Malcolm Turnbull is expecting his push for a cost-benefit analysis of the network will go to a parliamentary vote this week.

Mr Turnbull jumped on suggestions by Senator Conroy that a cost-benefit analysis would delay construction of the network.

The inquiry could be completed in six months and could happen as building of the network continued, he said.

Independent senator Nick Xenophon says the business plan must be released as "a matter of urgency".

"It's not fair to expect the Senate to vote on a $43 billion piece of information infrastructure in a complete information vacuum," he told reporters, noting that the Productivity Commission should also look into it.

"But it (inquiry) needs to be broader than Malcolm Turnbull's terms of reference."

Key country independent Bob Katter says he won't hold up the government's legislation by asking to see the business plan.

"The Opposition ... wants close scrutiny ... but I'm not holding up the rollout of broadband - no way.

"I think we should get building broadband as fast as humanly possible."

One Labor backbencher became confused on the details of the NBN when speaking with reporters.

Shayne Neumann used a map to argue many voters in south-east Queensland could not access ADSL because they were more than two kilometres from telecommunications exchanges.

Yesterday, Senator Conroy had said that ADSL was available up to four kilometres from an exchange.

Mr Neumann denied he was saying something different.

Pointing to a map showing apparent broadband coverage in Mr Turnbull's inner-Sydney electorate and his own, Mr Neumann tried to prove the need for high-speed internet was not a pressing one for Mr Turnbull.

"This is all about Mr Turnbull trying like John Howard to be Lazarus and rising up again."

The government is also hiding (in the paperwork) the compulsory:

INTERNET CENSORSHIP, that it plans to implement with the updating of the broadband infrastructure.

The government is outsourcing to 'mates' for overpriced services, whilst the workers are getting pittance, which incidenlty is not illegal, and falls under the banner of 'globalisation'.

Another typical case government fraudulent information delivered or rater NOT, to the masses.

There can be no suggestion implied or otherwise that the government is profiteering and / or colluding with the private sector. This information cannot be reported into the public arena, as the repoting parties will be investigated and NOT the alleged offence by the government.

Their careers will be in danger, as they will be blacklisted, and will be further investigated by the authorities to 'teach them a lesson'.