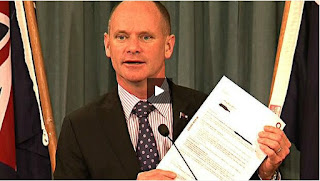 A furious premier Campbell Newman vows to refer Origin to the ACCC and encourages Queenslanders to change electricity suppliers after receiving a notice saying some of his charges will go up by 125%.


The Queensland government will scrap almost $27 million in contracts with Origin Energy after accusing the energy provider of unjustified price hikes.

"We are very serious about this," he told ABC Radio.
"Make no mistake, this government is very firm in its resolution to deliver cost of living decreases to the people of this state and will take the action we need to show our resolve."

The action comes after Premier Campbell Newman on Friday announced his own family was switching providers and urged other Origin customers to follow suit.

The government froze price rises for the household electricity tariff, tariff 11, as an election commitment.
However, Mr Newman said Origin raised that tariff and others, as well as various service charges.

The hikes were "not justified" and "unacceptably high", he said.

"They're trying to use that as an excuse, while consumers are confused, to actually put up prices more than what the carbon tax actually justifies," he told reporters in Townsvillewhere a community cabinet mereting is being held today and tomorrow.

Mr Newman regional consumers who couldn't "shop around" should be protected by the government's tariff 11 freeze.

"The only price increase that we should see is the actual carbon tax increase," he said.

Just a reminder of how much Australians are getting ripped off by the 'fraudulent' utility companies.