THE public was locked out of last night’s special Maroondah Council meeting as councillors voted on the 2013-14 draft budget. 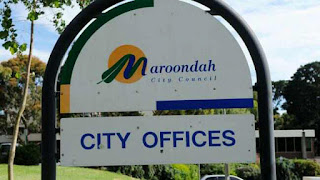 The Leader arrived at the Braeside Ave offices at 7.23pm, ahead of the meeting’s advertised start of 7.30pm, but the doors to the building were locked.

Ringwood resident Michael O’Connor also came early to attend his first-ever council meeting, but as the occasional staff member trickled out through a back door, it became apparent no one from the public was going to get in.

At 7.40pm, another resident came through a side door and announced the meeting was over.

He told the Leader he had gained entry through the side door as other council staff were leaving work.
Mr O’Connor said he was disappointed at being locked out.

The meeting was advertised as being open to the public.

It is believed councillors approved the draft budget, and it will go out for public comment until June 14.

The draft budget also includes $15.68 million for Aquanation, the proposed new Ringwood pool, which is dependent on Federal Government funding to be announced in July.

The Fire Services Levy will also be collected by the council through property rates notices, but is imposed by the State Government.

The masses are being duped by the authorities that local city councils are a part of government, which they are not.

Local councils are registered businesses and have been operating as such.

One part of their fraud is the illegal collection of 'rates'.

This has been exposed at the Shire of Melton council meeting in December of 2012.

The video documenting this fraud is called:

Pirates of the Suburbs - Destroying Communities by Rena Iliades

Is it not curious how this fraud on a grand scale escapes the attention of the corporate media?

Please note that the above comments were sent to heraldsun.com.au for publishing on their website.