Victorian cops are in the spotlight for all the wrong reasons. 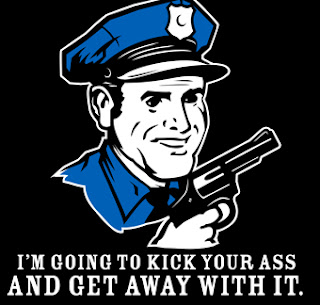 There is an internal joke that goes around as to which state holds the most corrupt coppers, whether it be Victoria, New South Wales or Queensland.

There is one thing for sure, and that is that Victoria holds the most shootings by the police force.

Corruption in politics and within the police force is the bane of society.

In Melbourne's north west, the municipality of Brimbank is considered as the most corrupt 'city council' to such an extent that over the years, there has been a complete change in office more than once.

Politicians are not the only corrupt ones in power.

As the old saying goes "Knowledge is power" (Francis Bacon).

One of the primary objectives of any authority is to keep the plebs in the dark and uneducated.

This also holds true of the Australia government, with its army the police 'force'.

As recently as the 21st of June 2013, the corporate media reported that Police power to stop cars under threat, a fact that has been known to the establishment for generations, but only has now been reported.

Corpau has followed up this article with lawful information that states that the police have NO RIGHT to stop you, under the article No need to stop for police.

This information does not sit well with authorities as Australia is literally a 'nanny state' or rather a police state.

In response to this certain members of the police 'force' still try to exercise their 'force' in many cases with assault.

Corpau has been informed of an attack on a driver, by police from the area of Melbourne's 'City of Brimbank', with the names of the officers involved.

In the darkness of night, with the illusion that no one is watching, police beat up a driver for not stopping, even though the driver was in the process of serving the notice to the officer.

What the police were unaware of is that the premises that the driver was stopped at had a concealed camera.

The police 'force', kidnapped the person (alleged offender), holding the person against their will, falsely imprisoning the person, finger printing them among other unlawful acts.

The police officers did all this in full acknowledgement to the 'alleged offender' of their common law rights which they violated.

The person in question has every right to charge the persons responsible and sue the state and police.

Now, let the cover up begin.