Here is evidence through an official letter from Foreign and Commonwealth Office, that NO Victorian Constitution act was passed.

This means NO ROYAL ASSENT for Victoria Australia. 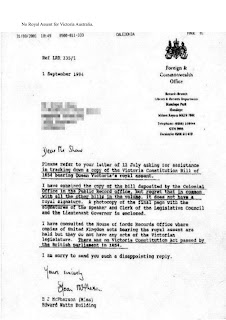 The relevant information from the letter is as follows:

Please refer to your letter of 12 July asking for assistance in tracking down a copy of the Victoria Constitution Bill of 1854 bearing Queen Victoria's royal assent.

I have examined the copy of the bill deposited by the Colonial Office in the Public Record Office, but regret that in common with all the other bills in the volume, it does not have a royal signature. A photocopy of the final page with the signatures of the Speaker and Clerk of the Legislative Council and the Lieutenant Governor is enclosed.

I have consulted the House of Lords Records Office where copies of United Kingdom acts bearing the royal assent are held but they do not have any acts of the Victorian legislature. There was no Victoria Constitution Act passed by the British parliament in 1854.