AN Adelaide debt collector found dead in his front yard was killed with a machete, police have revealed. 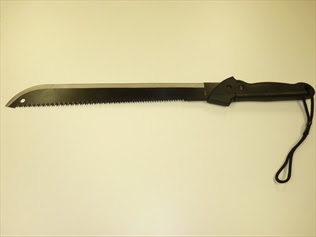 They have released images of a Gerber brand machete identical to the one used used in the murder of Allen Amin Asrawe, 33, in suburban Paradise on August 9.

At the time police said the victim was in the debt recovery business and had links to criminal associates.
They believed he may have been ambushed on his way home from work in the city which he had left at about 4.30am (CST).

Details of how he died were not released, but police on Friday released the images in the hope that someone may recognise the weapon which was found at the scene.

A 25-year-old man from Paralowie was charged with the murder on August 18.

Police on Friday alleged that he was with at least one other person when Mr Asrawe was murdered and are examining DNA samples collected at the scene as part of the investigation.

Investigators are also looking to speak to anyone who may have seen a black Audi TT Coupe in the area in the early hours of August 9, or on previous days.


Debt collection is UNLAWFUL in Australia.

The 'authorities' would have you believe otherwise, in order to instill subservience in the uneducated masses.

The legal profession is fully aware that since there is 'no binding contract' between yourself and the 'debt collector', no monies are ever owed to the 'collection agency'.

The aim of the game is for the masses to spend thousands in lawyer and court costs in order to 'prove' this.

ALL COLLECTION AGENCIES ARE FRAUDULENT.

Governments allow for this unlawful practice to continue, in effect supporting and perpetuating the fraud.

I visit your blog regularly and find here very interesting posts. Thanks for sharing these nice posts...australian debt recovery