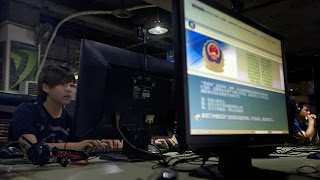 Computer users sit near a display with a message from the Chinese police on the proper use of the internet at an internet cafe in Beijing, China. Source: AP
THE Chinese government has declared victory in cleaning up what it considers rumors, negativity and unruliness from online discourse, while critics say the moves have suppressed criticism of the government and ruling Communist Party.

Beijing launched the campaign this summer, arresting dozens of people for spreading rumors, creating new penalties for people who post libelous information and calling in the country's top bloggers for talks urging them to guard the national interest and uphold social order. At the same time, government agencies at all levels have boosted their online presence to control the message in cyberspace.

"If we should describe the online environment in the past as good mingling with the bad, the sky of the cyberspace has cleared up now because we have cracked down on online rumors," Ren Xianliang, vice minister of the State Internet Information Office, said during a rare meeting this week with foreign journalists.

A study by an Internet opinion monitoring service under the party-owned People's Daily newspaper showed the number of posts by a sample of 100 opinion leaders declined by nearly 25 per cent and were overtaken by posts from government microblog accounts.

"The positive force on the Internet has preliminarily taken back the microphone, and the positive energy has overwhelmed the negative energy to uphold the online justice," said Zhu Huaxin, the monitoring service's general secretary, according to a transcript posted by state media.

Observers say the crackdown has noticeably curtailed speech by suppressing voices and triggering self-censorship, with more liberal online voices being more ginger in their criticism and posting significantly less.

Even Zhu suggested the campaign might have gone too far. In one example, internet users refrained from reposting information and commenting on the government response to a severe flood in the eastern city of Yuyao in early October. A year ago, they were garrulous in questioning Beijing's drainage system when a rainstorm ravaged the city. "It is a reminder that we must strike a balance between crushing online rumors and ensuring information flow," Zhu said.

Some critics say the moves may backfire by eliminating an effective conduit for the public to let off steam.

"If there's no channel for the public to express themselves, they may take to the street," said historian and political analyst Zhang Lifan, whose online accounts were recently removed without warning - possibly because he had shared historic facts that the party did not find flattering.

"The governments also can take pulse of the public opinion, but if no one speaks up, they will be in darkness," Zhang said. "It is so odd they are covering up their eyes and blocking their ears."

The rise of the internet in China has always been followed by Beijing's efforts to rein it in, and the latest challenge has been the explosive growth in social media, particularly microblogging, which has allowed users to share firsthand accounts and opinions with great speed. Advocates of free speech have applauded the technology as a strong boost to their cause.

"The unexpected growth has caught people by surprise," Ren said.

"They have always been able to control newspapers, radios and TV stations, but there have been some holes in the Internet, and the microblogging was the last hole," Chen said. "They have achieved their goal. When 10 per cent of the accounts are banned, additional 20 to 30 per cent of the users will not speak."

Authorities in recent months have been arresting microbloggers on the charge of spreading rumors or disrupting the public order, including a teenager boy who raised some questions over a murder case online. Many intellectuals, writers, and journalists have seen their blogging and microblogging accounts removed altogether. A Chinese-American businessman with a strong online following was arrested for soliciting prostitutes and paraded on state television in a campaign to discredit him.

Chinese propaganda officials have always seen the media - new or old - as a crucial tool to support state rule and are wary of cacophony.

"The ecosystem for public opinion online has noticeably improved, and that has created a good environment conducive to the overall work of the party of the government," Ren said, in touting the benefits of well-managed public discourse.

But the historian Zhang said Beijing has failed to play by rules when it shut down critical but law-abiding microblogging accounts. "They see critics as opponents," Zhang said. "That's a stupid thing to do."

Despite claiming preliminary success in taking control of the Internet, Beijing is likely to roll out more regulations. In a guiding document for the next five or even 10 years, China's senior leaders have mandated that the state must set the perimeters and the tone for online opinion with "positive guidance" and "management" and that the state should "standardise" how online communication unfolds.

Political analysts say they predict the heavy-handed control will continue. "They are still pretty nervous about preserving stability," said Steve Tsang, a political scientist at the University of Nottingham. "Given the political environment, I don't see any relaxation."

But known for their ingenuity to circumvent censorship, members of the Chinese public may again push for more room in speech, said Willy Lam of the Chinese University of Hong Kong.

"I think the cat and the mouse game will go on. People might be afraid now, but after a while, the old pattern will resume."


Australia is not too dissimilar with its internet and other political / corporate rule policies.

The government has declared something that has happened to be factual and truthful is another 'propaganda' spin.

Communism was created by  funds from the 'west' in order to be an 'evil' that must be fought.

In Australia is is far easier to control an internet connected population from 23 million people with the help of the United States, than a portion of China's 1,361 million people.

Australia's fascist corporate dictatorship puts China's regime to shame, the only difference being, is that China's oppression against the people is well documented.