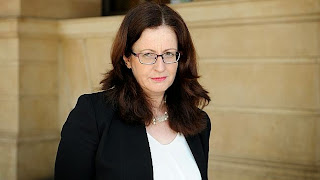 Justice Anne Bampton outside the District Court building today, after being reported for drink-driving and allegedly colliding with a female cyclist. Source: News Limited
THE widow of hit-run victim Ian Humphrey has called on the state's Chief Justice to rescind the appointment of alleged drink-driver Justice Anne Bampton to the Supreme Court bench.

At 12.30am that morning, the newly appointed Supreme Court Justice was reported by police for colliding with a female cyclist while driving with a blood-alcohol level of 0.121 at Glenside.

Watch as another corrpt judge escape 'justice', by the corrupt legal system.