In Melbourne, Victoria tax payer funded, and paid for roads, have been sold by the Victorian business commonly known as the 'government', via the tool Jeff Kennett to private overseas 'investors'.

This action has been done 'unlawfully', a fact that the corporate media is reluctant to report on and expose, as this fraud is worth billions of dollars in revenue annually.

Corpau has obtained information from a source that was willing to provide some paperwork that exposes the fraud involving Victoria Police.

What is more concerning is that an officer from Vic Pol stated that the paperwork the driver received has nothing to do with Victoria Police, despite it having the Victoria Police logo, as Vic Pol is not allowed to work for corporations (which contradicts their current actions). 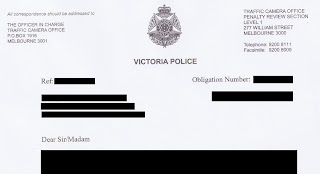 A section of the paperwork (see above illustration), which is edited shows the Victoria Police logo affixed to a letter from sent from a company known to Victorians as CIVIC COMPLIANCE PTY LTD (ABN 68 122 448 122 / ACN 122 448 122).


On the document that has been edited, the driver is referred to as the corporate entity (denoted by capitals) e.g. JOHN CITIZEN, which is further acknowledged by the opening salutation of Dear Sir/Madam, as seen in the above illustration.

What is not seen in this document is the signatory that being  D. Quach.

Since Victoria Police are now aware of the fraud, a report must be written up, followed up by an investigation launched into the fraudulent activities of the company CIVIC COMPLIANCE PTY LTD, and therefore a listing in the courts in relation to the fraud.

This fraud is in the magnitude of hundreds of millions of dollars annually to the Victorian motorists.

ALL TRAFFIC 'OFFENCES' MUST BE CONTESTED.

Below is an example of a letter that can be used:

Letter for Traffic
infringements in Australia

I, John Smith do proclaim that it is my WILL that I do not consent to doing any business with your corporation “Civic Compliance Pty. Ltd (A.B.N. 68 122 448 122)", unless you can provide me with a valid signed contract between both parties.

If you believe I am Guilty of an Australian Offence, then then please supply me with a Court Order for this offence, making sure it contains proper authorisation from an officer of the Supreme Court as laid out in the Bills of Exchange Act 1909 (Cth), and a public seal in accordance to the Evidence Act 1995 (Cth) section 150.

Infringement Notices have no Judicial Authority in Australian according to our Commonwealth Constitution Act 1900 section 71, and the Imperial Acts Application Act 1980 Section 8, division 3, paragraph 12, which are in full force today in Australia as voted by the people of Australia through its referendums. Therefore your Notice cannot be accepted for value as it is not Legal under Australian Federal law.

If you wish to take me to court I will only consent to having this matter heard in an Chapter III Commonwealth Court as “infringement courts/tribunals” operate unlawfully as star chambers, and you are also required to withdraw all promises of fines before hand.

can anyone call themselves public commonwealth officer?