There are many court cases that are of great significance where the information contained within is beneficial to the general populous especially where a matter sets precedence.

Judges, magistrates are fully aware of their actions at every level of the Australian courts, so much so that some comments in the case are not documented, or struck out of the public record, under a so called excuse ‘for the greater benefit’ meaning not to the detriment of the ‘system’ not general populous, which are two entirely different things.

There is also another important point to take into consideration is that a case file that appears in an official ‘government’ website repository, may not necessarily be the exact same document as the original transcript or case. In order to confirm this, the researcher would have to site the original documentation, a time consuming exercise, and depending on the case sometimes very difficult to obtain the original works.

There are a fair few important matters in case law that one should be familiar with when ‘law’ is ones subject of preference.

One important case with respect to the Australian Tax Office, existing as a ‘lawful’ (not to be confused with legal) entity, is the Wolter Joosse case in the HCA.

Keeping matters of this significance out of the public eye, striking out certain comments or even restricting access to the file is a good way of keeping the ‘sheeple’ in the dark.

At a particular point in time the Wolter Joosse case against ASIC was available at the url given (in the illustration below), where this is no longer the case. 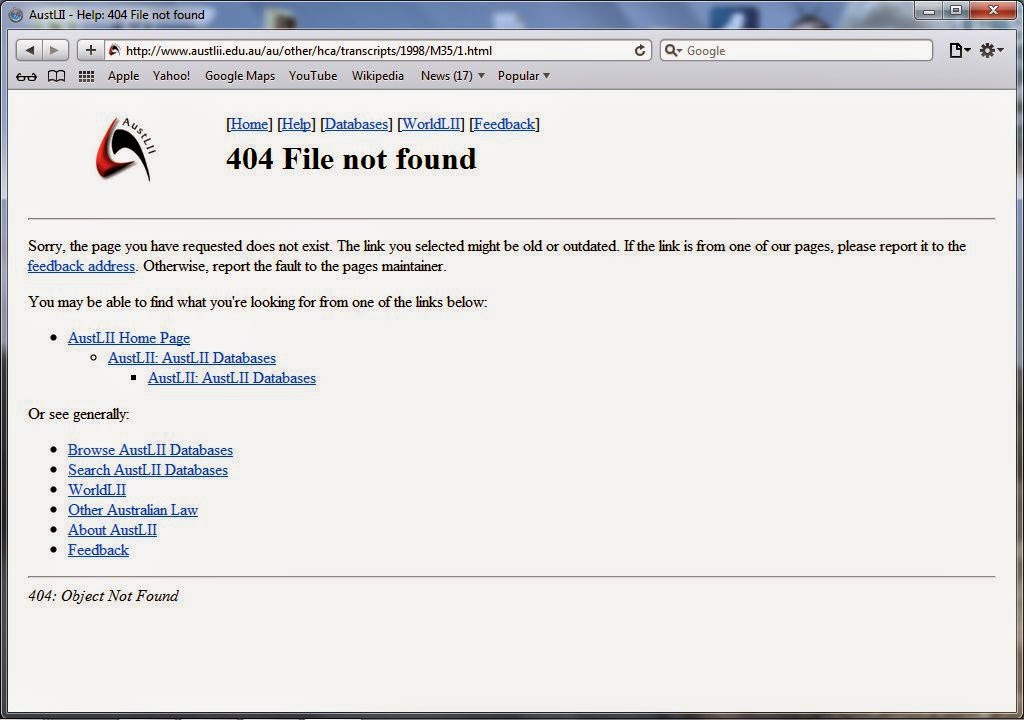 Even though the transcript of the document is no longer available at the above shown link, the 27 page transcript in pdf format is available for download from the following link:

Another matter worth having when dealing with ‘authorities’ with regards to taxation.

Where is the LINK and PDF ? Has it been removed from your own site ? Nothing seems to appear.

Thanks for bringing this up.


It seems like the pdf is not available in preview mode as it was once before.

The file is still in the archive.

It can be downloaded at:

It's a conspiracy I tell ya! A conspiracy to hide the trooth from the sheeple!!!

It's Austlii rearranging the layout of their databases. The transcript has been moved to www.austlii.edu.au/au/other/HCATrans/1998/492.html

Of cause it is available there is only a need to search for it.
http://www.austlii.edu.au/cgi-bin/viewdoc/au/cases/cth/HCATrans/2000/242.html