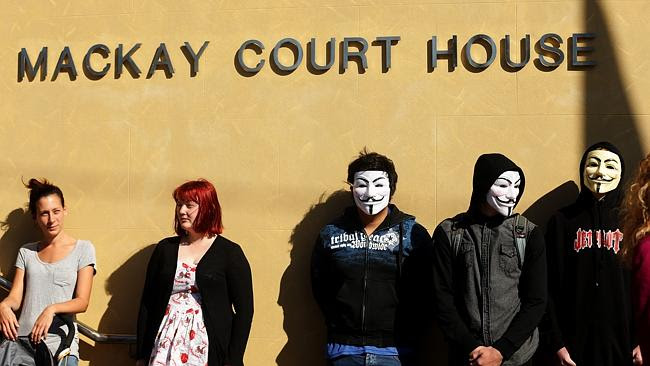 
The two men did not appear to face five charges each of rape.

The crowd — which included the victim’s parents — protested against both officers being earlier released on bail. Some wore the stylised Guy Fawkes masks popularised by the movie V For Vendetta and Anonymous organisation, symbolising resistance to state oppression.

The accused officers — a constable and a first-year constable aged 29 and 28 — have been suspended from work awaiting the outcome of the trial.

As well as the rape charges they also face one charge each of assault with intent to commit rape, and deprivation of liberty. The alleged incident happened in February while they were on-duty.

Their arrest was the subject of and Ethical Standards Command investigation earlier this year.

The matter was adjourned to August 28 as the defence awaits a DNA statement from the Crown prosecutor.

Protest organiser Jayson Maskell-Davis said any other alleged criminal would have been kept behind bars for lesser charges.

“That’s what people are upset about, and as you can see from the show of support today they’re upset about it.”

Mr Maskell-Davis said people did not feel safe on the streets because they did not know f they could trust police.

Protester Catherine Plant did not know the victim but said she wanted to make a stand.

She carried a sign that read: “I have the right to feel safe at all times and living in Mackay, I don’t anymore.”

Ms Plant said it was “unnerving” that members of the police force could allegedly commit such crimes.

Another story by the corporate media where the names of the criminal police is withheld.

What is concerning is that the corporate institutions known as court let these criminals loose, illustrating how the 'magistrates' support the criminal actions of the police, the very people who are supposed to 'protect' the public.

It is all part of the greater agenda of installing fear into the general populous.