From the article that appeared in Geelong's Star Community publication.

Photo of Phillip Gordon Shaw below not published by the publication. (Source: Supplied) 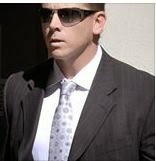 He was charged with rape last month following further investigations.

The charges stem from the same incident, which was alleged to have occurred while he was off-duty at a private residence on 26 January.

Mr Shaw, who has been suspended without pay, sat glumly in court five of the Geelong court complex while waiting for magistrate Michael Coghlan to rule on an administrative measure setting his next hearing for 29 May.

Dressed in a grey suit, white shirt and red tie, he looked downward, studying his hands and occasionally shaking his head as he waited for proceedings to move along.

He exited the court for some time after Mr Coghlan indicated he would not deal with the matter immediately.

On returning Mr Shaw said only, “No, your honour”, when asked whether 29 May posed any problems.

Mr Coghlan advised Mr Shaw to ensure he had legal representation when he returned in order to cross-examine any witnesses.

Mr Shaw left the court complex through a rear door, carrying a black backpack and in the company of another man.

Victoria Police IS a criminal organisation supported by the corrupt government AND judicature.

Watch as most probably this criminal / rapist will receive a 'suspended' sentence, as they all do.

As it has been alluded by people in office (by a Melbourne priest) with respect to Jill Meagher.