How to deal with a Ticket Inspector

In Melbourne, Victoria the 'public transport' system has been (unlawfully) sold off by a corporation conglomerate commonly referred to as the government.

As a result it is now owned by a foreign company and the government apparently has appointed 'authorised officers' to patrol the 'trans-port' system.

But under who's (lawfully enacted) authority?

Are they REALLY 'authorised?'

Under what lawfully enacted Acts does their 'authority' come from?

If you comprehend the real state of law in this country, you may come to the conclusion that Australia is 'lawless' and its people are subject to commercial / contractual agreements, with or without consent to the various corporations masquerading as 'government' entities.

In reality the 'ticket inspectors' on Melbourne's 'public transport' are thugs with low I.Q's just enough to follow orders without questioning. 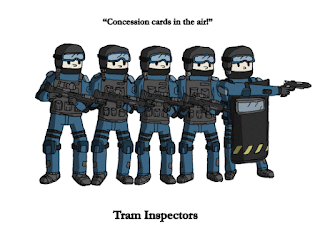 Apparently their 'authority' comes from a 'badge' whatever that means!

Here is one commuter's dialog with a Ticket Inspector:

I think that CE presented perfectly....
He whipped the scums asses....