All Bills in Victoria MUST go through SARC before they become law (an Act).

Why haven't you heard of them?

Could it be that the corporation conglomerate (commonly referred to as the government) does not want you to know about it??? !!! ???

Well SARC is the acronym for  The Scrutiny of Acts and Regulations Committee. 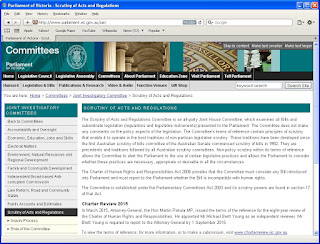 
The Scrutiny of Acts and Regulations Committee is an all-party Joint House Committee, which examines all Bills and subordinate legislation (regulations and legislative instruments) presented to the Parliament. The Committee does not make any comments on the policy aspects of the legislation. The Committee’s terms of reference contain principles of scrutiny that enable it to operate in the best traditions of non-partisan legislative scrutiny. These traditions have been developed since the first Australian scrutiny of bills committee of the Australian Senate commenced scrutiny of bills in 1982. They are precedents and traditions followed by all Australian scrutiny committees. Non-policy scrutiny within its terms of reference allows the Committee to alert the Parliament to the use of certain legislative practices and allows the Parliament to consider whether these practices are necessary, appropriate or desirable in all the circumstances.

The Charter of Human Rights and Responsibilities Act 2006 provides that the Committee must consider any Bill introduced into Parliament and must report to the Parliament whether the Bill is incompatible with human rights.

The Committee is established under the Parliamentary Committees Act 2003 and its scrutiny powers are found in section 17 of that Act.

In March 2015, Attorney-General, the Hon Martin Pakula MP, issued the terms of the reference for the eight-year review of the Charter of Human Rights and Responsibilities. He appointed Mr Michael Brett Young as an independent reviewer. Mr Brett Young is required to report to the Attorney-General by 1 September 2015.
To view the terms of reference, for more information, or to make a submission, visit www.charterreview.vic.gov.au.