Are you a Ms, Mr Mrs or a Mx - The corporate media's BS distraction?

Many a person may have had communications with Australia's Rupert Murdoch's media empire with regards to certain aspects of law where there is an eerie silence.

Not to worry though, one could not accuse the corporate media of a conspiracy, as they may show up to court matters and portray people as nutters, tin foil hatters or even conspiracy theorists with regards to certain 'theories' or interpretations about law.

The corporate media has gone to the trouble of publishing an article about how an insurance company has accepted a new title assignment an Mx.

This is literally useless information, as people need to know what their title designations are meant at law.

What's worse is that it's not rocket science to find.

The assignment of Mr, Ms, Mrs or Miss can be found on page 516 of an Australian Government published book called the Style Manual (Sixth Edition), under the paragraph titled Armed Services. 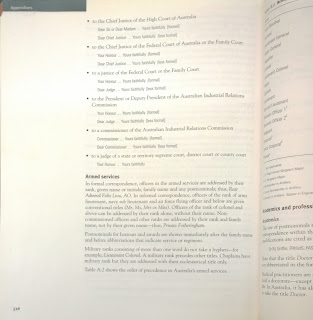 The text reads as follows:

While some people may argue that there is an interpretation attached to that paragraph, the real question could be put to the High Court of Australia (regarding the nature of law installed on the people of this land arising from a hostile takeover of land from the original inhabitants), whose function is to interpret the law in accordance to a document called the 'Australian Constitution'.

Should you choose to read the corporate media's totally pointless article you can find it in the following link: