Australia's Census fail - You did not have to fill it in? 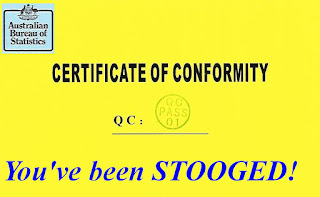 People in Australia may have been all too aware of the government (advertising) for the 'residents' to fill in the census.

The TV airwaves were littered with government 'propaganda'.

The ABS (Australian Bureau of Statistics) has stated that the deadline was the 23rd of September 2016.

It was then stated that you will be fined, even up to $180 for each day the form has not been handed in.

Now ANY constitutional lawyer should tell you that this is 'unlawful'.

The ABS then went back on its 'lawfully binding contract' and took the deadline back by a week to 30th of September.


As people should be aware, the television is an advertising medium used by corporations to tell people to purchase their products.

Since when does the Australian Government advertise 'law'?

Have you ever seen an advertisement (by the government) informing you that you do not have to carry your licence if you are above the age of 26?

This could be a administrative nightmare for police, but that is the law, well in Victoria at least.

Please note that the validity of that Act is put aside.

If the people are told to do something, which is allegedly compulsory, it MUST be done in accordance with law.

What is 'law' in Australia?

WITHOUT going into too much detail, 'law' is written in a document called an 'Act'.

So where does the 'government' get its power to tell the 'residents' to complete a form called the census?

Why from the Census and Statistics Act 1905, of course.

'We' have a few 'problems' here with regards to the direction to fill it in.

It also states that it is from the "Commonwealth of Australia".

So, what people must also note is that there is a document called the Australian Constitution, which is to be adhered to by ALL people in 'government'.

It's a document that tells the people how the 'government' MUST behave.

It's far from a 'conspiracy theory' as there is a place called the High Court of Australia, which upholds the law according this Constitution.

So you've been given a letter from the 'ABS' to fill out a census, but did you really have to?

According to the 'law', the Governor-General appointed Commonwealth Statistician, must direct your 'person' in writing to fill in the census form.

Let's put the lawful appointment of the Governor-General aside for now.

So has this been done, within the letter that every household in Australia has received?

Many people on social media forums have pointed out the 'unlawful' requests for the 'residents' to fill in the census forms, which we will not go into detail.

So the 30th of September was on Friday and you really have to (lawfully) submit ANY details to the company called the ABS?

Would you fill out a questionnaire from McDonald's asking you to tell them your personal information under the threat of an [unlawful] fine?

The ABS is legislated to work on calendar segments for requests, which the last ended Sept 30th, the next December's end. Since no one we know were fined, it's possible that they may attempt conformity in this next segment by re/issuing the command to fill up the form.

As you know there can't be any fines or forfeitures without conviction so technically the first fine claim should wall off any further fines till the end of a court hearing which take months to process.

The first letter the ABS sent to households was merely a ticket(coded) to go to their website and then be commanded to fill up a form. Unless you get direct commandment then you have no obligation to fill in a census form, if at all.

When the "collector" of the ABS came around for the third time,I advised her to read the notice of "Expressed removal of Implied Entry" to any and CORPORATE Agents she claimed she didn't understand what it meant and entered.An explanation of which was not my obligation to do. Similarly, the 'area stupidvisor' was told the same thing and told not to enter again.
He refered me to read the 1975 Act that gives them authority to do so...

Clearly, there was confusion in his mind that my name is not 'Resident'and that in no capacity do I the man perform a function of ABS or it's Agents.
He left