Many a person has been adversely effected by an entity called the 'Sheriff of Victoria' under the legal name of Brendan Facey.

One must not rely on the Rupert Murdoch media empire to inform the masses that this is done so unlawfully, under fraudulent action, deception, coercion and extortion with threats of violence and incarceration.

Their (CCV's) standard response to your legal obligation (ask questions, as people in court do) is "Just pay up".

Many people's first correspondence from the (alleged) ' Sheriff of Victoria may come in the form of a notice, as a result of not paying a fine from the unlawful and illegal 'Infringements Court'.

Many people have mistaken this document as an actual 'outstanding' warrant to the amount claimed in the paperwork.

The Sheriff's Office of Victoria has sent out paperwork to people claiming outstanding warrants containing a logo of the Supreme Court of Victoria.

This suggests that the Sheriff's Office comes under the banner of the Supreme Court of Victoria.

What people MUST know is that the Sheriff of Victoria is supposed to be an officer of the Supreme Court of Victoria, and MUST be appointed as such in accordance with the law.

The position must be gazetted, and the appointment of the person must be in the lawful government gazette.

There is no gazetted appointment for the person Brendan Facey as the Sheriff of Victoria, as required by law.

The Sheriff's Office of Victoria has also sent out paperwork to people claiming outstanding warrants containing the logo of the Magistrates' Court of Victoria.

So when did the jurisdiction change and where/when was this gazetted?

When asked of the Sheriff's Office to produce the alleged outstanding warrant the response obtained was that none exist.

So let's make this clear one more time.

There are no lawful warrants emanating from a place of business called the Sheriff's Office ABN 32 790 228 959.

Well according to their own laws, and not any 'conspiracy theories', forms directions etc must be documented and filled out according the rules specified.

This is what a 'warrant' is supposed to look like sans red comments:
See form in attached link -
http://corpau.blogspot.com.au/2016/01/what-warrant-form-looks-like.html

So where's the fraud in the letter from Brendan Facey as the Sheriff of Victoria.

So in this first letter from a person called Brendan Facey  as the Sheriff of Victoria from the Sheriff's Office Victoria the claim comes to the unsuspecting customer. 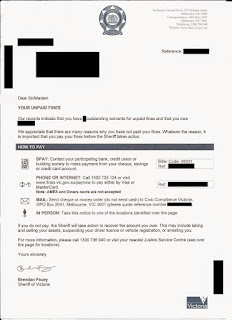 In this document you may notice a "Yours sincerely",  signature, a name and a title of Office.

The signature is a digitised (electronic) signature that is stored on a computer and pasted into the document.

There is no 'lawful' wet ink signature from that person.

The document is a fraud.

If anyone has obtained a 'wet ink' signature from the person Brendan Facey as the Sheriff of Victoria, please post this in the comments section.

Please do not post Brendan Facey's signature and position as Director of Infringement  Management and Enforcement Services, as this is not what we require and has already been covered in the Corporate Australia blog post of the title:

See the following document of the with regards to the lawfulness of an electronic signature, citing case law of the title

The convenience of executing legal documentation with electronic signatures must be carefully weighed against issues of enforceability and security. In this update, we explain the decision in Williams Group Australia Pty Ltd v Crocker [2015] NSWSC 1907, in which the Supreme Court of New South Wales ruled that a company director was not bound by a guarantee that (apparently) bore his electronic signature.

The key messages from this case are:
Background

Williams Group Australia Pty Ltd (Lender) sold building materials to IDH Modular Pty Ltd (Borrower) under the terms of a trading credit agreement that incorporated a director’s guarantee and indemnity. The document was seemingly executed by the Borrower’s three directors, including Mr Crocker (Guarantor), and witnessed by one of the Borrower’s employees.

In the months before execution, one of the Borrower’s directors (Brooks) set up a HelloFax electronic signature account that enabled the directors to remotely upload and apply their signatures to documents. Each time a director’s signature was applied, that director would receive a confirmation email attaching the executed document. The Guarantor, who worked interstate, received his login details for the account directly from Brooks and never changed his password. He soon uploaded his signature to the account.

When the Lender attempted to enforce the guarantee in the amount of nearly $890,000, the Guarantor claimed he had not executed nor authorised the guarantee’s execution on his behalf, nor had he any knowledge that he had been signed up to such a substantial liability. At trial, the parties accepted that the Guarantor had not executed the document himself – rather, an unidentified third person using his account had uploaded and applied their own signature purporting to be the Guarantor’s.
The Lender, whom at the time had no knowledge of these circumstances, argued that the guarantee should be enforced on two bases:
Decision
McCallum J of the Supreme Court of New South Wales J ruled in the Guarantor’s favour. We summarise the judgment’s key points below.

Authority
McCallum J acknowledged that an implied agency relationship could arise if the Guarantor placed another person in the situation where, by ‘the ordinary uses of mankind’, it could be understood that the person signing represented and acted for the Guarantor. However, the Guarantor’s mere omission to change his password did not demonstrate an intention to authorise anyone else to operate the account on his behalf. Such use would be a misuse – not an ‘ordinary use’ capable of amounting to implied authorisation. This conclusion was further bolstered by the fact that the Guarantor was never actually advised by the Lender, Borrower or other directors that he was required to provide a guarantee under the borrowing arrangement (even when the Borrower had previously provided a similar guarantee to the Lender).

The Court also rejected analogies to the situation in Pacific Carriers Limited v BNP Paribas [2004] HCA 35, in which the High Court found that a bank was bound by letters of indemnity that its officer had executed without the bank’s authority. In that case:

The representation of authority came from a combination of features of [the bank officer’s] presentation to the outside world, all attributable to the fact that Pacific was dealing with a bank, with all its institutional trappings.

Not only was the Lender here dealing with an individual lacking the ‘institutional trappings’ of a large company, the Guarantor had made no representations that another person was authorised or ‘held out’ as being able to bind him to the guarantee because, in the Lender’s mind, the Guarantor himself had signed it.

Ratification
Instead, the critical factor was whether the Guarantor had notice that he had been personally committed to the guarantee. The Lender’s principal submission was that the Guarantor received a confirmation email attaching the document after it was executed. However, Justice McCallum considered that this was a ‘slender basis’ to prove ratification because:
The Lender was ordered to pay the Guarantor’s costs.
Source : HallandWilcox


You can download the full 36 page document contained in the link: