Almost 30 years later, all the signs of the pre-Fitzgerald era are back

Change to misconduct and corruption in the police force must come from the top. A culture shift is long overdue 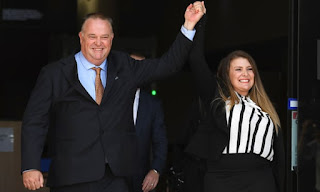 The Fitzgerald inquiry was supposed to be a reckoning for the Queensland police, a sign that the bad old days were over.

Tony Fitzgerald’s findings were particularly scathing of the way police dealt with misconduct and corruption. “The Internal Investigations Section has provided warm comfort to corrupt police,” Fitzgerald said. “It has been a friendly, sympathetic, protective and inept overseer. It must be abolished”.

Almost 30 years later, and Queensland is back where it started, showing all the hallmarks of the pre-Fitzgerald era. Internal investigations have been replaced by the “Ethical Standards Command” which more often than not allows police to investigate their colleagues.

How long are the premier of Queensland, Annastacia Palaszczuk, and the commissioner of police, Ian Stewart, going to sit by while history repeats?

In 2011, I took legal action against a Queensland police officer and the state for deprivation of liberty, assault and wrongful arrest.

The officer had come into my home and handcuffed me, while I was pregnant, for an alleged driving offence. I was subsequently found not guilty. The same officer had previously pulled me over more than a dozen times. I complained to every department tasked with the oversight of police. I went to the officer’s station, where I was laughed at. I then went to the Crime and Misconduct Commission, who referred me back to the same station for a second laugh.

By the time I eventually made it to the district court in Brisbane five years later to sue him for damages, I was a single mother with no resources to fund lawyers.

The police internal investigation found my complaint about this officer “unsubstantiated”. But after a four-day trial, the officer was found guilty of false imprisonment and I was awarded damages totalling $93,000. Why did it take a judge to rule his behaviour was unacceptable? 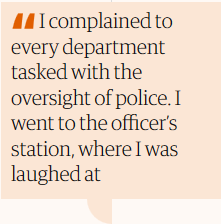 The same officer was one of the six officers previously charged with deprivation of liberty over the “Pinkenba Six” incident in 1994, where three Indigenous boys were taken out to the bush and later gave evidence to the CJC that the officers threatened them, threw their shoes away and then drove off. The charges were dropped, after the magistrate ruled the boys had gone with the police willingly, which resulted in a mass protest. The officers, however, remained in the police service.


For my trouble, police then asked me to pay $5,000 for the officer’s meals, accomodation, lost earnings and a “care and consideration” fee because the trial ran an additional day. This is the sheer arrogance of this police service: asking a victim to pay for the care and consideration of the officer who had violated her rights.

This is the sheer vindictiveness of this police service: when a young father was bashed by police in the basement of the Surfers Paradise police station, they took no criminal action against the officers involved – one was given a “suspended dismissal” and sent back out on the beat. Instead they decided to charge another police officer, Sergeant Rick Flori, with misconduct for leaking the video of the incident.

The most senior officer in the video, David Joachim, is a relative of police commissioner Ian Stewart. In August 2015, Stewart was interviewed on ABC radio and talked about Flori’s criminal matter and the leaking of the video. Yet when his relationship with Joachim was later reported, he said that he had earlier removed himself from the case citing a conflict of interest. Six years after the bashing, in February 2018, Flori was found not guilty. But the damage to this officer, and to his reputation, was already done. The officer who had pursued the charges against Flori was soon after promoted to a role at the Crime and Corruption Commission, the body tasked to investigate the very same kind of matters.

The CCC is where people who fall victim to rogue police go for help. Julie*, whose address was accessed by a rogue police officer, then handed to her violent former partner, went to the CCC. She was referred back to police.

At a press conference last year, Stewart was asked about the case. The commissioner said he was happy to speak to the same victim again, if it would make her feel better. He had never spoken to her the first time. She explained to me she felt further betrayed by an organisation she once believed was there to serve and protect victims like her.

Leaders in government and public service should make decisions that are in the public interest. But they cannot properly serve the community if they continue down the same path: on the one hand pursuing officers who expose corruption, and on the other protecting those who fail in their duty to serve and protect.

You will never change misconduct and corruption from below. It must come from the top. A long overdue culture shift will only happen when the bar is set high, and does not accept anyone who falters or falls below the standard expected.

* Julie is a pseudonym to protect her identity. She has also been referred to as Elizabeth in previous reporting about her case.

I also contacted the crime and misconduct commission and was referred back to the same police station.noosa heads.i have been unable to make a complaint in 40 years. I have been assulted by the police so have my children. My ex husband got away with serious assault i live on disabillity in poverty.put down by society.totally gaslighted. It seems if you have a police"friend" you can use police to terrorise any one you want to get rid of, to cover up your crimes. Can't say anymore .i live in fear