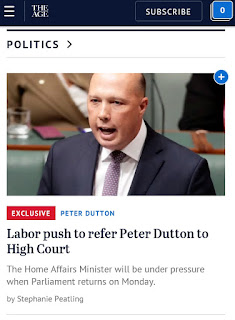 Labor will attempt to refer Home Affairs Minister Peter Dutton to the High Court when Parliament resumes this week with new legal advice suggesting he faces constitutional difficulties on not one but two fronts.

Constitutional experts have previously raised questions about Mr Dutton's eligibility under section 44 because of a childcare centre run by Mr Dutton's wife. Mr Dutton is a beneficiary of the family trust that runs the centre.

But fresh legal advice by Matthew Collins and Siobhan Kelly suggests the thousands of decisions Mr Dutton made as minister from October 2016 onwards could be subject to legal challenge because of the questions surrounding his eligibility.

The legal advice, which was commissioned by the Labor Party, says "Mr Dutton's eligibility to sit as a member of the House of Representatives in the current Parliament has not been determined."

"Until those questions are authoritatively determined, the validity of every decision made by Dutton pursuant to the exercise of a power conferred on him as a Minister of State, and by his delegates, after 19 October 2016 will be attended with uncertainty....It seems to us that, while the present uncertainty subsists, further challenges are all but inevitable."

Melbourne's Refugee and Immigration Legal Centre, confirmed to Fairfax Media last month that it was considering a legal challenge on behalf of its clients.

"This advice shows just how big the risk Scott Morrison is taking by keeping Peter Dutton in place as Home Affairs Minister while his eligibility is in doubt. If Mr Dutton is declared ineligible, thousands of decisions he has made as the Minister for Immigration and Border Protection should be open to challenge and the entire immigration system could be thrown into chaos," Labor's attorney-general spokesman, Mark Dreyfus, told Fairfax Media.

"The decisions open to challenge could include deportation of criminals convicted of serious crimes. Is Mr Morrison really willing to take this risk? He has no choice - he must refer Mr Dutton to the High Court to end the doubt and stop the chaos engulfing the Liberal government."


Parliament resumes on Monday for the first time since the Liberal Party leadership spill and Mr Dutton is under pressure on two fronts - the questions over his constitutional eligibility and his interventions on behalf of two foreign au pairs.

Mr Dutton faces the possibility of both a no confidence motion and an attempt to refer him to the High Court.

At the moment, the Coalition has 74 MPs on the floor due to Malcolm Turnbull quitting Parliament. A date for a byelection in his seat of Wentworth is expected to be set on Monday.


Labor has 69 votes but would need all five crossbenchers and independents and someone on the Coalition side to abstain or miss the vote.

Labor MP Emma Husar is expected to return to Parliament on Monday after her period of leave.

Even if Mr Dutton was referred, he would be eligible to sit in Parliament until the High Court rules otherwise, a process which would take months.

A spokesman for Mr Dutton told Fairfax Media, "Mr Dutton's legal advice clearly states there is no breach of the constitution".

Last month, Mr Dutton released legal advice he commissioned clearing him of any issues under section 64 of the constitution.

The Solicitor-General, Stephen Donaghue QC, has also advised Peter Dutton "is not incapable" of sitting in Parliament although he added it was "impossible to state the position with certainty".

In addition to the questions surrounding his constitutional eligibility, Mr Dutton is also involved in an increasingly personal fracas about his interventions on behalf of two au pairs.

Fairfax Media understands under the new portfolio arrangements made by Prime Minister Scott Morrison day-to-day decisions about visas and interventions will now be made by Immigration Minister David Coleman.