Think it can't get any worse travelling between the colonies, well you're in for a surprise.

Those pesky people who invented the constitution in Australia, made it difficult for some MPs to be in office lawfully, under what the plebs are now aware of as Section 44.

To make things worse the numbers go all the way up to 128, where section 127 has a bit of liquid paper on it

Why couldn't they just stick with "do no harm", where life so much easier in the 'good ol' days' prior to this pesky occurrence called civilisation or something that has a bit more of a corporate slang like Civil CIVIC COMPLIANCE VICTORIA (ABN: 97 103 604 897)

Some plebs just recently became aware of Section 92 (via social media, of course), and get that wrong, and now even more pesky plebs are going to be aware of this section which talks about intercourse (no, not sexual silly) and get that wrong as well.

Thankfully we have the honest High Court of Australia to interpret Section 92 of the Commonwealth of Australia Constitution Act 1900 (UK), for those who may want to get there as their final destination.

See article from 12 September 2018 by brisbanetimes.com.au of the headline:

Travellers could face fines of up to $4200 or imprisonment if they do not comply with new police powers to request identification at Australian airports, eject people from the premises and ban them from flights.

Under legislation introduced to Parliament by the Morrison government on Tuesday, police will be able to carry out identity checks when they suspect people are involved in criminal activity that poses a threat to the public.

Police will be able to issue a "move on" direction if someone refuses to cooperate or if they believe it will disrupt an imminent security threat. The person can also be banned from entering airports for 24 hours. 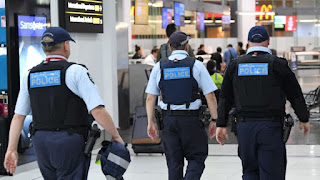 There will be boosted security at Australian airports. Photo: Justin McManus

“Police at our airports are highly trained in behavioural analysis and threat assessments. However, they don’t currently have the power to check ID unless they can link behaviour to a specific offence,” Home Affairs Minister Peter Dutton said in a statement.

“The proposed powers are commensurate with aviation security threats and will help our police protect the Australian community."

If people do not cooperate with police orders, they face fines of up to $4200 under the Crimes Act. They could also be imprisoned for up to 12 months if they provide misleading information or for up to two years if they are deemed to be obstructing a Commonwealth official.

Government identity documents or other personal identity cards and documents can be used by travellers when they face an identity check by police. If they do not have any documentation, they can provide their name and other details.

The government believes the current laws – which place a stricter limit on authorities' ability to conduct identity checks at major airports – are outdated given the increased terror threat.

Explanatory information provided with the legislation says, "Without specific intelligence that an offence has been, is being, or will be committed, AFP officers have reported that, under the current framework, they are unable to assess potential threats within airports by directing a person to provide evidence of their identity."

Shadow attorney-general Mark Dreyfus said Labor would examine the legislation closely and come to a position in due course.

"We expect this bill to be thoroughly examined through the parliamentary joint committee on intelligence and security," Mr Dreyfus said.

Greens senator Nick McKim said Mr Dutton was "attacking the basic rights of every Australian to distract from the multiple scandals he’s involved in".

Senator McKim warned the Home Affairs Minister could not be trusted with law enforcement agencies in his ministry and called on Labor to oppose the legislation.

“There is no justification for this ‘papers please’ policy," he said.

“This adds to the over 200 legislative changes over the last 20 years which remove fundamental rights and freedoms from Australian people.”

The laws are in addition to a $300 million expansion of security at Australian airports, including the introduction of advanced X-ray and body scanning machines.

End of article by brisbanetimes.com.au

See what the ALRC (Australian Law Reform Commission) states on Section 92 of the Commonwealth of Australia Constitution Act 1900 (UK).


On the imposition of uniform duties of customs, trade, commerce, and intercourse among the States, whether by means of internal carriage or ocean navigation, shall be absolutely free.[6]

5.10       In Gratwick v Johnson (1945), Starke J said that the ‘people of Australia are thus free to pass to and from among the states without burden, hindrance or restriction’.[7] However, in Cole v Whitfield (1988), the High Court said that this does not mean that ‘every form of intercourse must be left without any restriction or regulation in order to satisfy the guarantee of freedom’.[8]


For example, although personal movement across a border cannot, generally speaking, be impeded, it is legitimate to restrict a pedestrian’s use of a highway for the purpose of his crossing or to authorize the arrest of a fugitive offender from one State at the moment of his departure into another State.[9]

5.12       It has also been suggested that a right to freedom of movement is implied generally in the Constitution. In Miller v TCN Channel Nine (1986), Murphy J said that freedom of movement between states and ‘in and between every part of the Commonwealth’ is implied in the Constitution.[11] However, this view has not been more broadly accepted by the High Court.[12] Professors George Williams and David Hume write:


This reflects the lack of a clear textual basis for such a freedom and for the incidents of the constitutionally prescribed system of federalism which would support it, and an implicit view that the Constitution’s federalism is not intended to protect individuals.[13]

5.13       In any event, a right to freedom of movement implicit in federalism would presumably only extend to movement within Australia, rather than to a broader freedom which would include the freedom to leave and return to Australia.

5.14       The principle of legality provides some protection to freedom of movement.[14] When interpreting a statute, courts will presume that Parliament did not intend to interfere with freedom of movement, unless this intention was made unambiguously clear. In Potter v Minahan (1908), O’Connor J said:


It cannot be denied that, subject to the Constitution, the Commonwealth may make such laws as it may deem necessary affecting the going and coming of members of the Australian community. But in the interpretation of those laws it must, I think, be assumed that the legislature did not intend to deprive any Australian-born member of the Australian community of the right after absence to re-enter Australia unless it has so enacted by express terms or necessary implication.[15]

5.15       Freedom of movement is an essential part of personal liberty, which is also protected by the principle of legality.[16]

5.16       Freedom of movement is widely recognised in international law and bills of rights. For example, art 13 of the Universal Declaration of Human Rights provides:

5.17       Article 12 of the International Covenant on Civil and Political Rights provides, in part:

5.18       International instruments cannot be used to ‘override clear and valid provisions of Australian national law’.[17] However, where a statute is ambiguous, courts will generally favour a construction that accords with Australia’s international obligations.[18]

5.19       In other countries, bills of rights or human rights statutes provide some protection from statutory encroachment. Freedom of movement is protected in the United States Constitution,[19] and in the human rights statutes in Canada[20] and New Zealand.[21]
5.20       Freedom of movement is also expressly protected in the Charter of Human Rights and Responsibilities Act 2006 (Vic) and the Human Rights Act 2004 (ACT).[22] Section 12 of the Victorian Act provides: