Demand for corrupt cop to talk

There are a LOT of corrupt 'persons' within state (and territory) police forces of Australia.

BUT that will NEVER be the (real) concern of the government of this colony.

What is the concern of the colonial goverment is that the serfs keep paying for warrantless seizures of personal property, like in Victoria, under the ex so called 'sheriff' Brendan Facey, and his replacement Warwick Knight.

We will soon be entering the next phase of the police state, which will be described in a not too distant future post.

For now, see how corrupt police deal with victims in the mainstream media article: 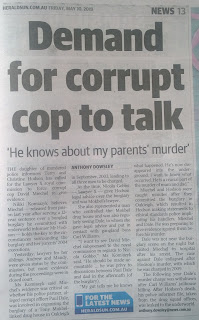