Woman says she was fired for being 'too hot' 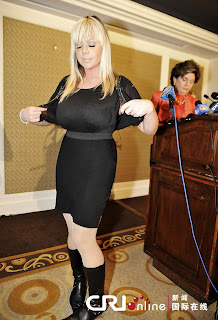 A US woman is suing the lingerie company she used to work at, claiming they fired her for being "too hot".
Lauren Odes, 29, claims her supervisor at Native Intimates lingerie told her she was "just too hot for this office," just days after she was hired in Manhattan, New York, on April 24, KTLA reports.
The New Jersey resident, who was hired as a data entry temp, claims management told her she should wear her boyfriend's T-shirt and sweat pants.
But Ms Odes alleges when she changed her attire it was not enough, and her supervisor then told her: "Lauren, try taping down your breasts to make them appear smaller."
Ms Odes only worked at the company for one week before she was fired.
Speaking to reporters at a press conference, Ms Odes said: "When I was first told that I was told I was 'too hot' and that my breasts were too large I was shocked, I thought I was dressed appropriately for my job."
Ms Odes claimed management made her wear a bright red bathrobe to hide her figure.
The 29-year-old has filed a complaint against the company to the Equal Opportunity Commission and hired celebrity lawyer Gloria Allred to represent her case.
Ms Allred, 70, is known for working on high-profile and controversial cases that involve the protection of women's rights.
She first came to prominence in 1987 after successfully suing the then all-male Friars Club in Beverly Hills.

Ms Allred has since represented high-profile clients including Nicole Brown Simpson's family during the O.J. Simpson murder trial and Debrahlee Lorenzana, who alleged she was fired for being too sexy to work at Citi bank in 2010.


Sexual Harassment in the workplace is common place. Proving it is a difficulty, especially in the hand or the misinforming corporate media.