COUNCILS want to expand the use of myki cards for everything from library services to community gyms. 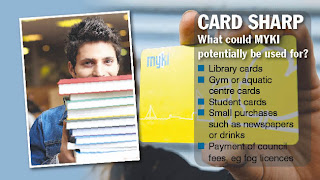 A coalition of four inner-metropolitan councils is investigating a radical plan to use myki cards to store the personal information of residents held in council systems.
The idea, flagged by the Inner Melbourne Action Plan, has been slammed by privacy groups who claim it would effectively create an identity card.

The tourism working group's report signals the "possible integration of myki with existing council systems", citing as an example its possible use as a library card.
Councils have access to plenty of personal information on ratepayers, including use of library services, fitness and community programs and centres, council rates, permits and pet registrations.

Liberty Victoria yesterday said the proposal would infringe on the right to privacy.
"If the intention is to share myki information with local councils - or, to put it the other way, have other information about you shared on a myki card - what you're beginning to look at is a Victorian identity card," Liberty president Professor Spencer Zifcak said.
A spokeswoman for Melbourne City Council said the idea was in "its earliest form" and no further details about the plan could be provided.
"A discussion about the possibilities has not yet taken place," she said.
"Such a project would not be undertaken until after the myki system has been completely rolled out and is fully functioning."
Public Transport Users Association president Daniel Bowen said the troubled ticketing system's focus should just be on public transport.

Transport Ticketing Authority chief Bernie Carolan said the organisation was concentrating on completing the myki roll-out by the end of the year.
"While smart cards do have the ability to be used as a payment method for products other than public transport, myki is a stored value payment card and its use in a non-payment environment such as a library has not been explored in any great depth," he said.

Another step in the direction to fully monitor, then control the movements of the masses.

Herald Sun did not open comments to this story, see original article:
http://www.heraldsun.com.au/ipad/councils-want-to-use-myki-for-libraries-gyms/story-fn6bfkm6-1226364942038