So now the mainstream media reports that in the wake of the Bourke St massacre Victoria Police are too scared  allegedly creating "horrible and tragic" outcomes because officers only act "when their hand is forced".

Is this the most sadly laughable biggest load of garbage PR stunt Victoria Police has ever written?

We have seen numerous attacks on non threatening people where a gang of police bash the person senseless into subservience.

Was Victoria Police 'scared' when they bashed Corinna Horvath to a point where this woman would not remember her name? 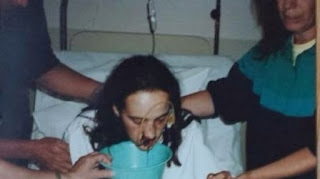 Is shooting people in the back a result of a scared action?

Is ramming a person's car into their letterbox then bashing him a result of being "scared"?

Is Victoria Police 'scared' about committing criminal offences against the public?

It does not seem so from our end.

Don't let the mainstream media tell you this, let an ex cop say it how it is according to the law (for the better use of the term), in his document :


Victoria Police is not your 'friend' (research the inception of the police 'force' in Australia), never was and never will, nor are they 'public servants' (where the tax payers are their 'masters'), as they work for the executive where the masses are the 'enemy'.

Victoria Police will keep on indulging in criminal activities against your 'person' until YOU take action in your dealings with Victoria Police.