Paedophile police rape women and the system hides it

I want to name my abuser, but the Victorian courts are preventing me 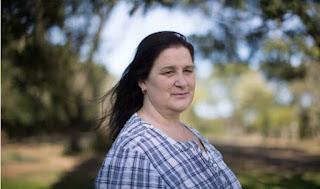 Tracey May was one of more than a dozen victims of a serial sex abuser – a former policeman. She fell pregnant to him when she was 11 and miscarried. Now she wants to let the world know who he is.

The trouble is, she can’t expose him, because it's prohibited by the Victorian legal system.


Five years ago, the state of Victoria passed an Open Courts Act to improve transparency of the legal process.

Despite it, restrictions on what the public can and can’t know about ongoing cases appears to be getting worse. One analysis found Victoria was responsible for more than half of the country’s suppression orders, more than every other state and territory combined.

Former Court of Appeal judge Frank Vincent wrote in his review last year that of the 1594 orders made between 2014 and 2016, 22 per cent were blanket bans that failed to say what was being suppressed or simply stated the “whole or any part of the proceeding” couldn’t be reported. Another 12 per cent didn’t give any grounds at all.

I faced him in court and I wasn’t afraid for the first time in my life. And then to be told I couldn’t speak his name ...
Child sexual abuse victim Tracey May

The review also found adult victims of sexual assault and family violence should, on conviction of the offender, be able to disclose their identity - a recommendation supported in principle by the Andrews government.

Yet to this day, a Magistrates Court suppression order forbids the publication of the man who abused Tracey May.  It also prevents the publication of his image and the police station where he worked, even though he was convicted and sentenced in 2016 to at least 15 years in jail.

His offending was horrendous. He brutalised nine children between 1967 and 1983. The youngest was five years old.

He molested one child in the police station, he attacked another in the back of a divisional van.
One parent reported him to police in 1979, but he wasn't charged. Instead, he resigned from the force and moved to New South Wales, where he offended against another seven children.

“I faced him in court and I wasn’t afraid for the first time in my life. And then to be told I couldn’t speak his name,” Ms May said.

“He can’t be protected and he is."

Victims of Crime Commissioner Greg Davies said while orders are often made to protect the identity of victims, victims are not being asked what they want.

“It’s been deemed by everyone to be irrelevant,” Mr Davies said.

The order that prevents Ms May from naming her attacker was made in 2012, when the court proceedings just began, and it has no end date.

In September last year, crossbench senator Derryn Hinch used his parliamentary privilege to name the man he described as "a monster", but media were still unable to identify him.


When the case progressed to the County Court, the higher court did not issue a new suppression order, but the paedophile remained protected because he was given a pseudonym; Lewis Goddard.
Chief Magistrate Peter Lauritsen said the order was made under the Magistrates Court Act, and not the Open Courts Act, which was adopted in 2013. The new act introduced a five-year lifespan for orders.

He said all parties, including media, have the opportunity to argue against an application.
"Non-publication orders serve an important role in our justice system," he said.

"They are designed to protect the safety of any person involved in the court process, to ensure the proper administration of justice, to avoid further distress to a complainant or witness, or to protect national security."

Ms May, however, refuses to give up. As a child, she was made to feel ashamed. Now, she says, “I’ll keep fighting to name him.”

Well what are the consequences if she DOES name Him..Send his Name to me I will gladly Name him..

Never give up. The paedo is being protected again! Victims are not so afraid to speak out now which is how it should be!