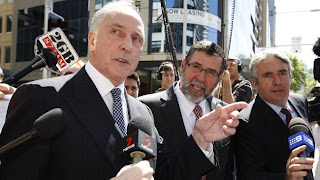 PAUL Keating has had a charge of running a red light dismissed in a Sydney court this morning.

The former Prime Minister came before Magistrate Carolyn Barkell in the Downing Centre local court to fight an allegation that he ran a red light in the CBD last Australia Day.

He was pulled over by two police officers not far from the intersection of Pitt and Park Sts after they claimed they saw him go through the red light.

But Mr Keating, who was on his way to visit his mother, was adamant that the light had been yellow when he drove through it in his daughter's green hatchback.

He described the traffic on the day as "impenetrable" and "crawling" due to road closures on the public holiday.

The offence carries the penalty of a fine and three demerit points.

Magistrate Barkell deemed there wasn't enough evidence to prove the allegation and dismissed the charge.

Outside court Mr Keating, who was accompanied by his lawyer Sam Macedone, said he was happy with the outcome.

"I think it's important that ordinary people in the community, having received an infringement notice for an offence they didn't commit, basically understand that the system isn't weighed against them and they are entitled to have the courage of their convictions," Mr Keating said.

Clearly showing ( and flaunting the fact infront of )

the peseants that the 'leaders' are above the law.

The same law does NOT apply for the rulers and for the masses.