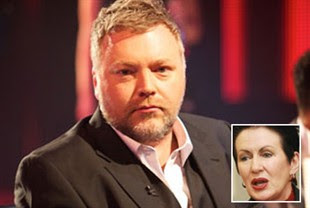 Shock jock Kyle Sandilands has launched a personal attack on Sydney Lord Mayor Clover Moore, vowing to "get rid of that woman".

Sandilands used his 2DayFM breakfast program on Friday to rail against Ms Moore's plans to introduce laws which would allow Sydney City Council to close pubs and nightclubs at midnight.

The X Factor judge, who reportedly bought a stake in Kings Cross nightclubs the Piano Room and Trademark two months ago, said the proposed laws would put owners out of business.

"All these nightclubs, they'll all shut down because they can't make money if they close before midnight," he said.

"I'll get rid of that woman, you watch. Eighty-year-old woman trying to run the town. Go to the retirement village, you old clown."

Sandilands accused Ms Moore of being out of touch and made a personal jibe at the politician by clearly exaggerating her age.

"Let's face it, this woman's 80, so she has got no clue what the majority of us really want," he said.

A spokeswoman for Ms Moore told the Sunday Telegraph that Sandilands was mistaken about the impact of the proposed changes.

Some bars and clubs would still be allowed to open until 3am and others for 24 hours, she said.

This article does not focus on the person making any accusations,

BUT rather the hidden agenda / politics behind Sydney's Lord Major Clover Moore.

Politicians are quick to introduce new laws upon the masses to 'lock them down' in what can only be described as a Nanny State.

The masses are given ANY plausible excuse for the introduction of new laws, that will ultimately restrict the free movement of the general populous.

This is now being accelerated at an astonishing rate, and still goes unnoticed by the masses.