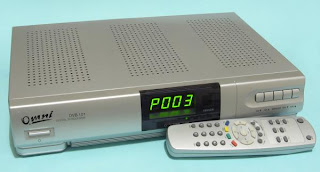 A Herald Sun investigation has revealed dodgy set-top boxes given to Mildura residents, the first in the country to switch to digital-only TV, have already been replaced by digital TVs.

The investigation also revealed set-top boxes were being given to pensioners who already had digital TVs.

It comes as the Government faces increasing scrutiny over the program that has been likened to the bungled home-insulation scheme, which was linked to fires, rorts and deaths.

Mildura locals said since switching to digital TV in June last year, the scheme had been plagued with problems, including dozens of reception black spots.

Local pensioners also slammed the Government's average installation cost of $350 a household as a waste. Similar set-top boxes could be bought at major retail stores for as little as $48.

Almost 150 complaints about the installations have been lodged nationwide.

Pete Taylor, of Mildura, said his set-top box broke down less than a month after it was installed, while a neighbour decided to buy a new TV shortly after he received his device because it had stopped working.

Pensioner Neville Wilson said he had problems from day one.

"I just want to sit down, relax and not get frustrated ... someone is making a lot of money out of us (pensioners), by doing quick jobs," he said.

One local, who asked not to be named, said he knew several people who had taken the Government offer despite already having digital-ready devices.

"They just hide them in a cupboard, get the new one from the Government, and then pass that on to a friend or family member," he said.

David Shafer, a spokesman for discount electronic retailer Kogan, said many more set-top boxes could end up being discarded.

"The major pitfall ... is that the Government is trying to extend the life of ageing technology rather than replacing it," he said.

Another money for mates scam within the government, where its failure will be paid for by the general public in the form of higher taxes.

The government is flaunting its failures in an unashamed way with NO accountability for the failed projects.

Another Gillard government waste / failure. They are easily the most incompetent government of all time.