An Egyptian bodybuilder with 79cm-circumference arms has won the Guinness World Record for having the largest biceps. 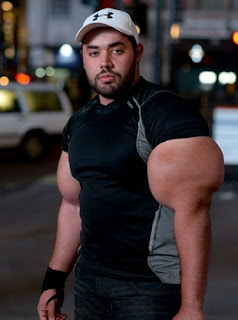 Dubbed the real-life Popeye, Moustafa Ismail said he got his cartoon-like muscles by pumping iron twice a day for 10 years, the Huffington Post reports.
The 24-year-old started bodybuilding in Egypt to stay fit but started concentrating on his biceps after receiving hundreds of compliments on his arms.
Is winning a world record worth the effort? Have your say below?
"My friends in the gym just couldn't believe how much my arms seem to grow so I began to really focus on getting bigger," Mr Ismail said.
Five years ago he moved his family, including his 30-year-old wife Carolina, to the US so he could get access to better gym equipment.
Mr Ismail now trains twice a day, with his first gym session at 5am, and can lift 227kg.
Nicknamed "Big Mo" by his friends, Mr Ismail's daily diet consists of 1.3kg of chicken, 0.5kg of steak or fish and four cups of almonds with three litres of protein shakes.
But Mr Ismail said that unlike the beefy cartoon character Popeye he is not a fan of spinach. 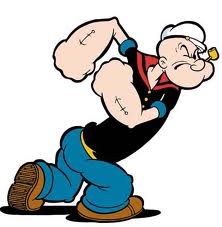 "People always say 'you remind me of Popeye the sailor man', this makes me laugh, the truth is I don't have any spinach in my diet, I can't stand the stuff," he said.
"I'll stick to my chicken I think — actually I think my arms are now bigger than the cartoon character."
Mr Ismail will appear in the Guinness Book of World Records 2013 when it launches in London this week.

Nothing less expected from a trash tabloid for 'inaccurate' reporting.

Focusing on the morons of society takes a high priority, to keep the canon fodder amused

(Note: 'Popeye' has exaggerated forearms, as opposed to Ismail's biceps.)

Most readers  commented that either Synthol injected directly into the bicep or steroid use was responsible for the oversize biceps and not hard work as claimed by Ismail.