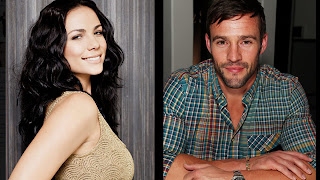 The news she’s been dreading and he’s been keeping quiet. Dannii’s baby daddy has a new flame.

The photos of her estranged partner Kris Smith in a romantic embrace with his new love, Australian model Maddy King are sure to break Dannii Minogue’s heart. Despite the loved-up new couple’s best attempts to hide their relationship — swapping cars to elude photographers, entering and exiting buildings separately — the secret is out.

During the recent Myer fashion parades, the brunette Dannii look-alike was ensconced in a room with Kris at the Swissotel Sydney in the CBD. However, their best efforts to fly under the radar failed when Kris insisted on Maddy joining him for his 34th birthday celebrations last week and the two couldn’t keep their hands off each other. After dining at The Village in Kings Cross, the couple moved on to Bondi’s trendy The Bucket List, where Woman’s Day caught them kissing and cuddling in front of fellow diners including Sydney Roosters footballer Anthony Minichiello and wife Terry Biviano.

It appears Kris has shuffled off the cloak and dagger. Friends close to the handsome model and father of son Ethan with Dannii, 40, say he has been terrified of going public with his new love fearing it may cause problems with Dannii. The former couple are said to be keeping things civil for Ethan’s sake, and Kris is determined to keep it that way.

“Kris loves his little boy and will always respect Dannii as Ethan’s mum,” a friend of Kris’s says. “The last thing he wants to do is rock the boat with his ex or Ethan.” “He knows everyone is watching his every move,” another mate adds. “It wasn’t easy being Mr Dannii Minogue in Melbourne and it’s not a whole lot easier being the ex-Mr Minogue, anywhere.” But there is no use in hiding the fact it’s over.

Who really care about these 'entertainment' nobodies?

Something the children of the masses can 'aspire' to.